A Review of The Succubus Seduction: Frenkel’s Battle Against A Demon’s Pervesion by Naomi Agate 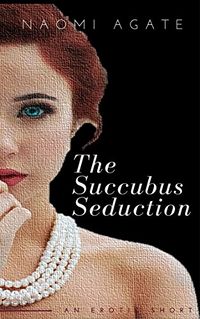 The Succubus Seduction: Frenkel’s Battle Against A Demon’s Pervesion by Naomi Agate

To tell a story about Lilith, she does need to be a force. There needs to be power in her words, her form, and her desires. There will be darkness in that, of course, which leads to the question of how does a man resist her? Or really can he?

To be trapped, ensnared by a Goddess can lead to more than one’s undoing. It can lead to desperation, want, desire and loss. To battle powers beyond comprehension needs something more than faith. It needs a belief in one’s will and one’s ability to sacrifice.

Frenkel’s infected. And it all started at the damn Gym that his friend had recommended. In there he discovers a force that is so intensely sexy and erotic; And evil. His world overturns. Feverish and with a raging hard-on, he casts a spell on everyone; even his demure housekeeper Mrs. Sukhon isn’t spared. Frenkel’s world then plunges into a strange place filled with pretty priestesses, strange rituals, mind-control fuckery, seduction in strange settings all in a quest to bang the demon who wants to bring about the apocalypse. Yet, when he sees the naked demon bringing in other worldly persuasions, would he be able to hold his own? For sin is in the air and it feels really good.

Sometimes life isn’t what you expected, if you happen to be Frenkel, things become very complicated and strange. A not so simple visit to the gym results in Lilith sinking her claws into him, for a purpose she has been working to have real for far too long. But there are others who stand against Lilith and Frenkel would be wise to heed them. But is it enough against the force of nature that is Lilith herself?

The story focuses on Frenkel and being so there’s very little seen or told about Lilith herself. She is a force in the work, but she isn’t core to the story. The story gives light to Frenkel’s battle within himself, the needs that Lilith has pushed into him and in that comes moments both sexual and frightening.

There’s really very little erotica in this work, there is heat, but it is warm at best much of the time. The focus is on the physiological, the mental battle, and Frenkel’s weaknesses and strengths. The time spent in telling that fight takes up much of the work and its interesting for how Lilith sneaks into things, tempts and tugs on Frenkel and then vanishes. Lilith is a threat, but it’s an esoteric one as a whole.

Lilith is a succubus, her power is her sexuality, her temptation towards Frenkel. She takes several forms, but never really appears with horns or a tail. She appears human, tempts Frenkel and is pushed back now and again. There’s little said about Lilith herself, she doesn’t speak in the work about herself. She exists, she needs, she wants, but otherwise Lilith as a character here is a bit of a ghost.

The work needs some editing for various issues. At times the storyteller seems to be someone that is not a native English speaker and as such the tone and choice of words is clunky and un even. There’s a point at which three different tenses are used within one paragraph. Some of the dialogue just sounds odd or weirdly off.

That said, the story itself is very unique and I thought it told a very good story. There is a lack of Lilith herself, though she is a force, and some of the story leaves questions to the side for the sake of brevity. It’s less about Lilith as a succubus than it is about Frenkel facing off against her, falling in and out of her control and the result of that happening. The editing however, really takes away so much and that’s a shame.

The work needs some editing at least to make things read better. It feels like the work is written by someone that isn’t a native English speaker in how some of the sentences are constructed. But getting past that flaw, the overall story is quite different than most and I liked it for that. I’m a bit disappointed that so little time was actually spent with Lilith herself, a story untold. The ending closes the story, but at the same time there’s a hint that it isn’t.

A little confusing, a little lost at times, but then the main character was like that through much of the story as it was. It’s a unique aspect of Lilith, her power and desires. Perhaps a reflected one overall, but nonetheless, interesting.