Succubi Image of the Week 465

A Review of HSA-98: The Jackal by Quixerotic

A Review of the Succubus Lives series by M.G. Bubbles 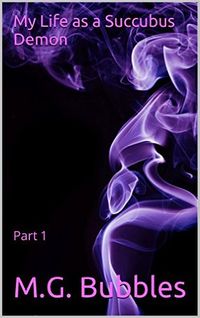 My Life as a Succubus Demon: Part 1 by M.G. Bubbles

There’s more to writing a story than the actual writing. The story can be amazing, the characters stunning, but if the editing is a disaster, then the story can’t be what it should be. A review of a series that has a good idea, interesting characters but has several problems as well.

Learning you are a succubus can be traumatic, it can cause no end of problems. Trying to deal with yourself is one thing, but then trying to deal with everyone around you takes things to another level. Then toss in some Gods, a war, and a jealous lover and things really go to hell quickly.

My name is Rose. I am 22 years old and what you would call a trust fund child, minus the stupid spending part. Everything was fine in my life. I had a nice apartment, I had my best friend Clair and my life was just a normal everyday type of thing. That all changed when Clair introduced me to Sage…

Rose’s life has been sort of a mess. Her life seems to be normal, but things change when her best friend brings Rose into a world of succubi, elves, nymphs and gods. It wouldn’t be quite so bad if Rose had some time to figure out what’s going on, but she’s wanted. Being wanted is something that Rose never wanted to be. Being needed by two sides in a battle isn’t anything to be happy about either. 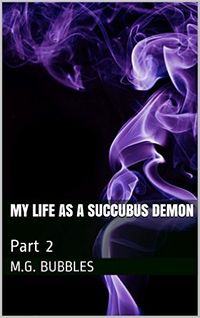 My Life as a Succubus Demon: Part 2 by M.G. Bubbles

I’ll be reviewing both works in the series at once, as many of the issues that I had with the series appear in both works. They do connect together, there’s an overarching plot and storyline. Things get a lot more complicated in the second work in the series, but for Rose, that seems to be not that much of a surprise.

Learning what you are is complicated. The truth comes out in little bits and its up to you to put the pieces together. Sometimes being alone isn’t the answer, but it’s a place to start. The bigger question is where will that knowledge end and are you able to handle it when there’s no where else to turn?

I woke up sleeping next to the enemy, or so I thought he was. The name is Rose and I have found out I am a Succubus. That’s right, a full blown man eating demon (literally). I have to find away to put my life together and figure out the truth from the lie. If that doesn’t already complicate my life, finding out my other secret will.

If Rose’s life wasn’t complicated enough, having someone mess with her mind takes things up a little bit more. A deal struck, or so it seems, and Rose finds herself at odds with a Goddess. Then Rose has to meet her lost lost family. Being a succubus, she fears that won’t go well. It’s not herself that Rose has to be concerned about, it’s those that want her, desire her or are jealous of her.

The series follows Rose as she discovers she is a succubus, that mythical beings are real, and she is part of that world. The single thing about Rose through much of the work is an attitude that just doesn’t quite get what’s going on and doesn’t find her way to solutions. Part of that is circumstance, but much of the time, it’s Rose’s own character that trips her up.

Not everything goes right, many things go wrong of course. There is betrayal, battles, loss and more. There’s a hint of mind control, among other powers, but it’s not really focused on clearly. Things tend to happen at breakneck speed for Rose and those around her. Some of the scenes with Rose discovering her powers I thought were really well done, but they were somewhat fleeting.

As Rose’s backstory comes out, it’s complex and varied, needing a lot of time spent to straighten it all out. But that doesn’t happen well. There are a few points where time is taken to tell that part of the story, but things turn quickly and the gains are tossed aside for moving onto the next crisis in the work, and there are a lot of those.

Beyond Rose’s story itself, the overall plot, which revolves around, and within, a family’s battle within itself, I thought was a little too complicated. The author seemed to have to jump in and out of things, bring in characters for a scene, then make them disappear too often. There are quite a number of secondary characters in the series, some of which only appear once. Others are more important, but as well they seem to be pulled in and out of events almost at a whim.

While the characters are interesting, and the plots are as well, there’s a single problem with this series that takes away much of the promise. The work is very difficult to read for all of the mistakes that crop up. Every page has issues. Words that are simply wrong, misspelled, incorrect. Some of the sentence structure is nonsensical.

I can’t honestly say this work was even edited. There’s far too many problems left in the writing. It’s a shame because the core idea is good, Rose has some promise, and the series seemed to be moving towards a goal, even if that might be a little murky. It’s disappointing when an author has a really good idea, but doesn’t take the time to clarify their story and make it was it should be.

The editing takes away so much from what otherwise should be a four pitchfork rating. This series has a complicated plot, characters that have depth and if the editing allowed it, that would make for an amazing series. But it can’t be for how terrible the words on the page read. So many simple mistakes that could have been corrected by even a basic editing.

What’s a bit more disappointing is that this series did not continue to a third work. The second ends on a cliffhanger, it’s obviously meant to continue, but as of this review that never happened. Being so, the series leaves so much unanswered, so many characters in limbo. I like the characters, I think the story is a good one.

But the editing? That leaves so much to be desired.