A Review of the Succubus Lives series by M.G. Bubbles

A Review of HSA-98: The Jackal by Quixerotic 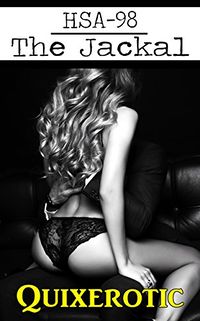 HSA-98: The Jackal by Quixerotic

An ongoing series that I have been reading from time to time is the HSA Archive series by Quixerotic. The thing about this series is that the focus is on a hot flash which leaves, at least for me, a lot to be desired. The stories feel like a tease sometimes and when that happens they leave a lot of questions scattered about to wonder over.

Some deals are made without knowing exactly what the deal is. Whether that is because one only cares about what is offered or rather needs that alone, is a debatable point. Still, sometimes getting what one wants isn’t what one needed. It is, however, what something other did.

Sometimes sex and hungers are one in the same and when they are, there’s little left for anything else when the need devours oneself.

Lucy believes she has a normal, albeit, lonely life. When a strange man appears outside her house, she learns of her own dark past. The Jackal has come to collect and Lucy has no choice but to go along with the agreement. Transformed into a divine beauty, Lucy is unleashed on the world as the Jackal nips at her heels.

Lucy’s life is depressingly normal. She carries on in the world until one night she finds herself confronted by something unexpected, demanding that she complete their agreement. The moment passed, Lucy is changed and nothing will be the same again, for once the predator is unleashed, there is no going back to what once was.

But in spite of this, there are moments when the two are face to face that seem to be missing something. While it presses the plot forwards towards Lucy’s transformation, the moment is fleeting and without real substance. That then brings things to when Lucy… isn’t so much Lucy anymore.

It’s a little difficult to call her a succubus, though in some respects she can be seen as one. She’s hypersexual, she has cravings and becomes completely immersed in sex to all else. But while that, and her physical presence, suggest she is a succubus, there’s not much exploration of that. She is a being of sex, of sexual need and brings that out in others. But there’s really little in the way of Lucy being an actual character beyond her transformation. That’s the part of the story that bothers me the most. Lucy is different, but there’s no personality behind her being “sex on heels” and I found that rather boring.

The erotica is very short, the story comes to a rather abrupt close and when the story ends there are a multitude of questions left in the wake of what happened. This isn’t much different from the other works in this series, but then really it’s more about the mystery than actually saying what’s going on exactly. Still, I would have liked something more about Lucy than the off-handed ending which didn’t do a lot for me.

The work needs another editing as well, there are quite a few word mistakes and the occasional spelling mistake as well. The beginning needs to be compressed to an extent, or, perhaps more to the point, Lucy after her transformation needs to be explored a lot more than it is. One encounter is a suggestion only. Something more, certainly Lucy coming to terms with her new self, or facing her past, would be really interesting and I’d like that to have happened. A short flash misses out on developing the character and I just feel like that happened far too much.

The story was far too lost at the beginning and being so a lot of story was missed out on it felt like. Lucy’s transformation is interesting, but short. What she is, exactly, is a question as well. Is she a succubus? In a way she is, at least as a sexual predator. But there’s no little seen of the “new” Lucy that telling much more about her is impossible to say.

It is a hot flash, needing more story and more development for Lucy as a whole. I think there could be a lot more here, but this series tends to be quite short and pointed in plot and characters leaving a lot unsaid. Still, I’d like more story overall at least.