A Review of Futa Succubus Joins a Gym by M. Dunn

A Review of Satan!: Hell High Book 2 by Michael-Scott Earle 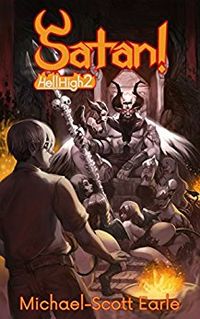 Last month on the Tale I reviewed the first work in the Hell High series by Michael-Scott Earle, and you can find that review here. I thought it was a delightfully fun story with quite a lot of promise, even if there was a catchphrase that made me roll my eyes when it happened a bit too often. Today, a review of the second work in the series just recently released to my delight.

I have been wondering about quite a few things, Sherman for one, just what’s with him, Charlotte for another, to see more of who she is. Beyond that, trying to get an idea of what’s going on, who’s involved and how both Sherman and Charlotte tie into things. The story has begun, the question of where things go and how it all works out is still to be seen.

It’s important to keep the tone, the flavour in a series. To keep the reader invested in the story and characters. Especially when there’s one single comment which made me raise an eyebrow and… wonder… what if…

Whoever thought having a succubus for a girlfriend would turn your life upside down? Now Sherman is on his way to meet Satan. Fortunately, he’s not quite the bad guy everyone has made him out to be. Less fortunately, The Lord of Evil has a job for Sherman, and let’s just say that if our impromptu hero fails, well, he’ll have 99 problems but a succubus won’t be one.

Sherman got the girl… sort of… mostly. She’s taken him to Hell, wants him to meet Satan and that’s just the high points of their relationship. Sometimes video games and anime teach you important things and Sherman is going to need everything he’s learned. But the one thing he hasn’t a clue about is how to talk to Charlotte, the love of his life, now that she’s right there in front of him.

Following directly on from the prior work in the series, the work has the same tone, the sense of action and the delightful main characters still playing off each other so very well. The past isn’t forgotten, if anything it brings this work into sharper focus character-wise and there is quite a bit of development that occurs for Charlotte but perhaps not quite so much for Sherman himself. Still, there are insightful moments for bot of their characters and as such, even with the breakneck speed, there are little flashes of something else going on which I thought worked well within each of them.

While quite a lot is told about Charlotte’s home, how things work, the beings that exist there and how they relate to each other, much of the story falls into a long chase as in the first work in the series, but with a difference. In this work the destination is reached and it’s nothing like one might expect. That’s not to say there aren’t some hints of how things are, but it’s more how so very odd this place called Hell is and how Sherman takes it all in stride. After all, anime and comic books have a lot of good information in them.

The focus on Charlotte’s character, on some of the succubi that are encountered was a bit more sexually charged at times, but it wasn’t over the top. The story sets up, in a way, a society of Hell, how it all works and acts like a “who’s who” in many ways. That didn’t come off as an info dump, but it did allow for direction which was needed in the story after the, quite literal, car chase was underway.

There’s one particular passage which made me smile, which has to do with baking. There’s also a little comment by Charlotte about three specific succubi… one of which has a rather familiar name and made me laugh delightfully. I thank the author for that little touch, it was a wonderful surprise by far. The problem is, however, seeing Charlotte’s personality and that name appearing… does make me wonder… with a bemused smile of course.

The twists in the story run from silly to quite serious and everywhere in between. When Sherman meets Satan himself, how that scene develops was everything I could have asked for, being true to all that came before and what might be next. Also, from my perspective, Sherman not needing that catchphrase from the prior work made this a better read. Sherman’s thoughts were more natural, more clear and the emotional context of them was stronger as well.

A stronger work overall, even if the chase aspects were a bit overdone at times. I will say that when there was time within the chase for Charlotte and Sherman to think, to try to make sense of things, that held me far more than the chase did. Beyond that, seeing Charlotte more of a succubus than the prior work was lovely. But she’s still holding so much of herself within and I wish there was more from her perspective in that. The meaning for Sherman being where he is, also needs to be explored more.

The threads are gathered together, and that’s a good thing. The action might need to be slowed a bit more, the story might need to be focused a little more. But these are quibbles. At its core, this a fun, cute story about two souls trying to figure out themselves. This should be fun to see what comes next when it does.

Getting rid of that catchphrase helped a lot. focusing on Charolette and Sherman dealing with each other was wonderful. There’s still a lot of questions about Sherman, about Charlotte, but the answers will come in time it seems. The series continues to move at breakneck speed which sometimes works and sometimes not, but remains as delightfully funny and captivating as the first was. A solid sequel, leading to the next work in the series to come and I am dearly looking forwards to seeing what comes next.

Especially one thing that tugs at me and I blame the author for this. The big question of who is Charlotte’s mother, and is she a particular ebony-haired red tail Succubi Queen that has a bemused smile, needs to be answered. Along with if she likes cherries… Time will tell I suppose… But it would be a fun thing to see…