Succubi Image of the Week 463

A Review of The Legend of Elissa series by M. Dunn 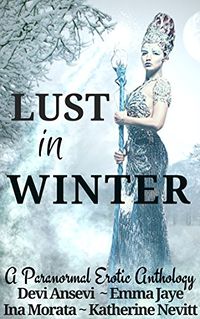 That’s a bit vague I realize, but then the story itself is about a Christmas Wish, a very odd one at least from my perspective. As such, it’s a bit of a different work to consider compared to most that I review.

As this is an anthology of works, I will be reviewing the incubus related story in particular and then the collection as a whole as I normally do.

The work is described as a collection of:

Warm yourself in the blaze from this quartet of lusty novellas. In the fourth volume of the Lust series, our authors bring you shivery tales of creatures with fangs, fur and claws. Lusty ghosts, hungry vampires, frost giants, and Christmas fairies delivering dark wishes…Let us fill your stockings with some seriously sexy treats.

In Devi Ansevi’s Sugar and Ice, when a banker meets a candy artist, sparks ignite – quite literally. He’s the descendant of a frost giant. She’s…well, that’s a mystery. Whatever she is, she’s got power to spare. Hawk and Candy have little in common, or so they believe. And then the dreams start. With dark forces working against them, can they overcome their differences in time?

In Emma Jaye’s Dark Christmas Wish, Winter is a fairy in the Adult Wish Department at the North Pole. His latest assignment will take Winter to his limits, and beyond: dark domination of a submissive incubus by a Master vampire. He has always loved dominating his lovers, but for this dark wish, he’s the incubus.

In Desires of the Winter Women by Ina Morata, ghostly sisters of ice and snow battle for the attentions of the same man in the wilds of Alaska. Their love triangle heats up the mountainous terrain. When one sister enlists the aid of the lusty Inuit Master of the Mountains, the resultant bonfire may bring an early spring thaw.

In Katherine Nevitt’s Dreamwalker, Leona survived a violent attack that has left her blind and bitter. She agrees to spend Christmas in the mountains with her best friend, hoping the peace and quiet will ease her terrible nightmares. Nothing seems to work, until a vampire begins to stalk her dreams. Their attraction is instant, but will Zach’s offer to restore her sight cost her the ultimate price?

In Dark Christmas Wish, Winter the fairy takes on a Christmas wish that isn’t at all child-like. A dream of an incubus being dominated by a vampire is asked for and Winter is the one to be drawn into the fantasy. Forgetting who he was, becoming the incubus Winter, he lives a new life before being taken and dominated. But in the end who’s being dominated in truth?

The work tells an interesting series of stories that are very much like the idea of nestable dolls, in that there is one story within another within another and so on. It’s well done, and I liked how each level of the character’s realties are dealt with. While Winter is an elf, and that’s clear from the beginning of the work, his “incubus” personality is deep, well written and has a history that held my attention. It’s a shame that history was a bit skimmed over for the sake of getting to the story itself, but in the context of a dream, or wish, it made sense.

Winter as a young, not quite incubus, was the part of the story that was amazing for me. Dealing with his human friends, trying to accept what his parents wanted, what his own needs and desire are, that told a story that on its own would be a thrilling tale to be told. It wouldn’t have to go where this story went however, and just seeing what might have been otherwise is something that I ponder about quite a lot.

I’ll give this story three out of five pitchforks.

Overall, the anthology contains some very well written stories with full characters and a constant theme and focus throughout. For those that enjoy their erotica a bit darker, I think this work will be very appealing by far.

For the anthology as a whole, three and a half out of five pitchforks.

I just didn’t find the stories worked with my sensibilities, but that does not mean there isn’t some very good writing to be found within the pages.