A Review of Blessed by an Incubus by Christopher Maldini

A Review of Build A Bimbo Workshop by Liriel Saarinen 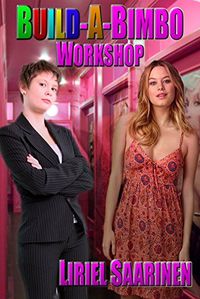 There are some works that I stumble across where I don’t expect a succubus to appear. They don’t seem like it would fit, make sense all that much. Occasionally however, while the story might not be about the succubus herself, she is there, she’s very present, but most of all, as a succubus character, she’s delightful.

Lilith is what she decides to be, what she desires within herself. There are many aspects of her, many myths to tell but perhaps the most wonderful of them all is the Lilith that cares. That Lilith, more than any other, brings with her something needed. The ability to love, lust, and desire again in the souls that have lost their way.

While out shopping with her boyfriend, Allison is offended to find a store called “Build a Bimbo Workshop” in her local mall. Outraged, she tries to make a complaint, and finds herself getting a first hand look at what services the store has to offer. Falling down the rabbit hole of transformations and alterations, David inadvertently begins to customize his overbearing, feminist girlfriend to his preference. But some things don’t always work out quite the way you expect.

Allison and David find themselves in a store which is quite the surprise. Neither realizes what they have walked into, neither understands really what’s happening to them both. But there is one person that does know, and Lilith isn’t above taking them both to where they need to be.

The first thing to say is that this isn’t per se, a story about a succubus. Really it is a transformation story with a little touch of mind control erotica. The thing is, this isn’t a nasty story, this isn’t a story in which the characters are transformed completely from who they are. There’s a very strong theme of love between the two main characters that has been lost, one not seeing, the other missing it dearly. The story tells of someone helping them to find that again.

Her name happens to be Lilith and that’s where things get interesting, for me at least. From the moment she appears, Lilith offers many hints and suggestions about who she is, but never really comes out to say. For myself, that teasing of who she is, as the characters never are told, was wonderful and I loved her character dearly.

Being that the author, in the postscript to the work, reveals quite a bit about Lilith, it leaves me wanting to know more about her in this universe. She’s lovely, her attitude is wonderful and, in many ways, there’s a certain belief and understanding that I dearly loved.

The erotica has some heat, but much of that is played outside of the story. This is, as I have noted, a transformation work more than anything else and really there doesn’t need to be a lot of erotica for how involving the story is otherwise.

Wonderfully romantic in its own way, a delight to read and Lilith is captivating as the mystery she is. I’d love more to be told about her, perhaps that will happen in the future, and I hope the author will return to Lilith’s world eventually.

Really a delight to read, the story is touching, real and the characters love doesn’t wane throughout. Lilith is a mystery, though at least for me, who she represents was obvious from the instant she appeared to the deliciously perfect ending. I’d love to see more, to learn more about Lilith herself. Telling more of her story interests me with all of the little hints and teases that come from her character.

Lovely in many ways and while not really a story about a succubus, there is one there, lurking. Discovering her was the most amazing surprise of all.