A Review of Build A Bimbo Workshop by Liriel Saarinen

A Review of Blessed by an Incubus by Christopher Maldini 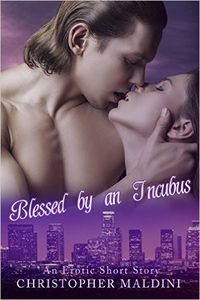 Blessed by an Incubus by Christopher Maldini

Sometimes a story needs a hook, a twist, something to turn the story a little sideways from what it seemed to be. Sometimes that works, sometimes it doesn’t quite manage. A lot of that can be influenced by the characters themselves. Their voice, whether internal monologue or dialogue, can take heat from a story, or slow things to a crawl. Either is a good thing and avoiding that can be difficult as a whole.

Sometimes being oversexed means your fantasies get in the way of your life. Sometimes it means that the universe wants to teach you a lesson. It isn’t always a question of knowing what’s real, but rather being able to deal with one’s own sexuality.

Raised in a strict Catholic household, Diane isn’t sure if she truly believes in God, but the thing that keeps her in perfect attendance at church every week is the insatiable lust she has for her Priest.

Father Paul, a clean shaven, compassionate and humble man, modestly hiding his muscularly chiseled body under his cassock and vestments, pays a private visit to her apartment after she complains of frequent sexual attacks from an alleged incubus; a dark spirit which forces itself upon her at night. Coincidentally, these demonic encounters began just after Diane black mailed her boss.

Whether the attacks are real or imagined, Father Paul’s visit unexpectedly provides an opportunity for Diane to fulfill her lustful fantasies with her Priest.

Diane has problems, some are from where she works, some come from her fantasies about a certain desire she has, and some come from an incubus that is haunting her. Diane needs a solution and perhaps she can find solace in her preacher. But then, the incubus has similar thoughts as well.

The story focuses on Diane and her fixation upon Paul which is, to be quite honest, really over the top and more than just a little bit bizarre. Most of that comes from the constant internal monologue that Diane has with herself and with the reader. The tone, overall, seems to be close to a monotone, a singular mindset upon imagining all of the things that she wants to do with him and what she believes he would do to her.

That theme exists on almost every page, and when it isn’t totally at the fore, then Diane’s hyper sexual needs are described. There are events described where, in the most uncomfortable of situations, Diane’s thoughts cannot help but slip into sexual fantasies. Really, if one didn’t know better, Diane could very well be a succubus, but she isn’t.

There is an incubus in this work, who is never named, really never appears fully. There are suggestions of what he might look like, what he wants, where he comes from and why he is haunting Diane, but it isn’t a story really told. The incubus is a means to an end, a direction for Diane to be taken in, over and over again. Beyond that there’s really not much in the way of character or development for him, not even giving him a name, which was disappointing.

The erotica is a series of hot flashes, some really very good which do mix into the plot and story well. The problem comes in the jarring shift from the moments of passion to the long periods on consideration, reflection, and need that Diane experiences. The heat is there, clearly so, perhaps a bit over the top at times. The issues just comes back to Diane’s monologuing which just took the heat away.

The work ends in a twist which wasn’t unexpected. It was a little disappointing in that I don’t think it needed to be drawn out as it was. Beyond the revelation, the ending is abrupt, leaving me wondering what happens next to Diane, what her life it like, and what comes next… other than her of course.

I would have liked more told about the incubus, about the deal struck. It would have been nice to have an ending that wasn’t quite so murky, even if it was only to suggest something of what might happen. An open ended conclusion is fine and it makes some sense here. Most of all, Diane’s monologuing needs more emotion, more power. Her thoughts seem so muted against her personality and that left something behind not told.

The twist in the story was a bit telegraphed early on, some of the hints were really strong as a whole. I think the almost non-stop internal monologue from Diane hurt the story to an extent. I would have liked more certainty in the ending, a bit more explanation about what exactly happened, and a name for the incubus would have been nice too. There is heat, there’s no question, but somehow Diane’s constant reflections get in the way and they really shouldn’t have.