A Review of The Half-Succubus Gal Julie Direct 2: Demon Games by Heidi Fisk 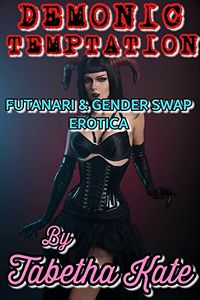 A review of the first work in the Demonic Temptation series, and I will be reviewing the second work in the series on Friday. The thing about writing a series is that there needs to be a strong central character to gather stories about. If that character has enough power alone to support that series, then things can be very interesting. But just having them present, and not really telling their story, can be a bit of a problem.

Wants and needs are kinds of desire. They can push a soul into making a deal they do not understand. It isn’t always about the deal, but the dealer after all.

Sick of being ignored and passed up again and again at his job, Nick decided the only answer lies in a very literal Deal with The Devil. When the demon he summons turns out to be a sensual creature named Azazel, though, he realizes he might be in for more than he bargained for… especially when he sees the thick, long, hard piece of Hell she intends to use on him! Will the money and success be worth it? And what will Nick do when he learns that demons have a taste for women… and the ability to change their pets’ gender?

Nick wants power, to be successful. Seeing that the quickest path is making a deal with a devil, he summons one to make that come true. But when one summons a succubus, the one that comes isn’t always the one you expect.

There is some interesting plot to tie the erotica together in this work, but overall there’s a singular focus on the erotica over the story and I wish that wasn’t so. The beginning of the work seemed to offer a lot of story to develop, to explore, but as things unfold the focus turns erotica over story.

While Azazel is the succubus of this work, really the only things known for certain about her is that she is a futa, she enjoys tricking humans, and otherwise there’s very little told about her. It’s a shame because I thought she was interesting and I wanted to know more about her.

The erotica are a short series of hot flashes, with a little bit of a gender transformation added to the latter part of the work. The thing is, while the erotica is told in all kinds of detail, the transformation isn’t. Nick is “changed” in an instant and the erotica quickly moves on from there. There’s a distinct “over the top” quality to much of the erotica which took me out of the story at several points as it was, many times, just pushing too far past the boundaries of what I could accept.

I wanted to know more about Azazel. There are some interesting quirks about her, such as calling Nick “morsel” that I wanted to know more about. Really much of what is seen of Azazel’s personality is very interesting, but it isn’t used much more as a tease to draw Nick to his “doom” overall. The focus of the work, mainly on the erotica, doesn’t tell much in the way of a story. While there is some well written futa erotica and a fair amount of BDSM as well, and a little bit of a gender change, they are there for the sake of the erotica. I wished for more story to balance things out, but that didn’t happen.

The characters need to be developed more, there needs to be at least one more editing pass as there are one minor tense problems in the work. The erotica is a little over the top, the story needs to be more present.

Too much erotica and not enough story and character development. Azalea is interesting, and I’d like her to be shown not to be stereotypical. There’s something good in this series and I hope the author will consider building up a mythos and story overall going forwards to balance things out more.