A Review of A Summoner’s Mishap by R.K Coventon

A Review of The Succubus: The Complete Anthology by Alana Church 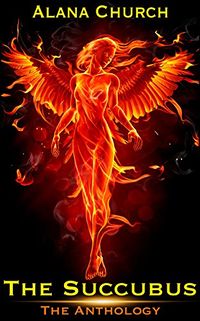 The Succubus: The Complete Anthology by Alana Church

A little while ago I reviewed the final work in Alana Church’s The Succubus series. I’ve adored the series from the beginning in many ways and it is one of my favourite series by far. Recently the entire series was released as a single collected volume, and you can find Amazon and Smashwords links here to that collected work with what I think is just an amazing cover…

This review will be of the series as a whole, my thoughts about it as such and some musings that came to me since my last review in the series.

There is a truth, a single purpose to which souls find themselves connected to. In discovering that truth, in finding their way to accepting it, comes the need to accept who one is and why.

Even a succubus can discover that, in spite of the past, there’s hope. All she needs to do is accept that hope in spite of her own, human, failings.

Torn from her body by a foolish mortal, Althea, first among the succubi, was forced to take shelter in Rachel Wainwright, a successful attorney. Now they are bound together, and their journey will push both them, and Rachel’s family, to the limits of desire as they learn what it is to truly love. This is the story of…The Succubus.

The story of Althea, first of the succubi, powerful but flawed. The tale of Rachel, successful, but missing a part of her soul. The tale of a family, lost, seeking direction, finding that, in the end, only family really matters. A story of need unspoken, wanted, craved, but not brought to the surface until it cannot be refused. The threat of darkness unleashed and what will be if it is not stopped. A truth, faced by all, in that one’s own nature is shaped by one’s soul.

There are a number of themes and story plots that unfold in the series, but the single focus comes to the question of family. What one would do, needs, lives for within one. How Althea comes to be part of a family, her acceptance, over time, of something that has been with her for ages, not being able to express it fully. Telling of the succubi, who they are, what their purpose is and what they want, as so many souls do. The mixture of tales to be told allows for amazing character development, none of them being quite the same when the story comes to a close, which for me is the mark of good story telling.

It is a work of erotica, touching on many different flavours. It allows for each connection, need and want to be explored, but also explained. It isn’t sex for the sake of it, nor is it erotica without meaning. It is a vital part of the story, it presses on each character to figure out who they are, what they need. Purpose drives the story, makes the heat more, expresses the relationships and makes them grow.

It is a full work, the story has a beginning, middle and ending. There’s no need for drifting away from the core characters, to go off on tangents without meaning. The story is tightly written, the details matter, the dialogue sounds right, with every character having their own, clear voice. Each is given the moment to shine, to be at the core of the story. Being so, the moments of laughter, of tears, are much more emotionally impactful.

There are, of course, some story plots left open, the appearance of two characters that made me smile, one in particular for which I was thrilled beyond words to see. The emotional connection is delightful, the resolution of Althea’s arc made compete sense. Most of all, the gift which appears, in all of its forms, is one that’s perfect in so many important ways.

I’ve loved the series from the beginning, I love it even more now. Althea, Yasna, Rachel and her family are dearly loved for all they represent and have been. One of the most delightful, passionate series about succubi that I’ve read in some time. I dearly hope Althea’s story will continue, but if not, knowing her has been a dear pleasure to me.

A dearly loved series, one that I have loved from the beginning and now in a single volume, the story comes fully into what was held within the pages. A lovely heartfelt story that made me smile, tear up at times, but throughout was true. Well enjoyed, fully recommended and more.

But, as always… I hope and wish for something more to come, to tell of what comes next…

My love and hopes for Alana, I wish her well in her future works, I will be looking for them…