A Review of The Succubus: The Complete Anthology by Alana Church

A Review of A Summoner’s Mishap by R.K Coventon 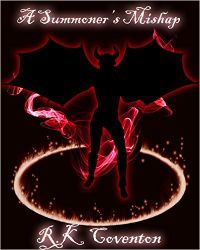 A Summoner’s Mishap by R.K Coventon

A very common story theme that occurs with succubi and incubi are those who use magic to summon them and then are either tricked or just are foolish in the first place to be the pray. It can provide a story with some heat, but when the editing of that story leaves a lot to be desired, then there just isn’t any heat in the first place.

The other thing that can be a problem is when the dialog just doesn’t “sound” right. No work is perfect, but at least an effort should be made to make a work readable and enjoyable instead of cringing at the problems encountered.

Cameron is a disgruntled apprentice mage to Tiege Gistell, the grand Matron mage. One day, while Tiege is away for business, Cameron sneaks into her masters quarters and spots a grimoire open on a desk in it she learns how to summon a demon. Things however things go awry and she does not summon a helpful demon servant, but rather accidentally summons a powerful incubus intent on turning her into his servant instead!

Cameron has been training under her teacher for a very long time and finally has a chance to discover some secrets. A spell offers a means to summon a demon, which she does, and Cameron finds herself facing something she wasn’t prepared for. An incubus that has plans of his own. And Cameron will play a leading role in them.

The author attempts to set up Cameron as a character whom the reader is to be interested in, wanting to see what happens to her and how things unfold. This sort of works, why it doesn’t well I’ll talk about later.

The incubus of the work, Arion, is for the most part, very stereotypical in nature, having a one-track mind for most of the work. Even when the story takes a bit of a turn and twist, there’s not really a change in Arion’s overall tone, personality, or intentions. I would have liked him to be less overbearing dominant and somewhat more seductive. In truth, he isn’t seductive as a whole, instead simply using Cameron’s own body and emotions against her.

There’s a slight tone of mind control in the work, but the focus is on Cameron submitting to Arion’s control and then his having his way and where things go from there. Even when another character enters the fray, there’s no real battle for their own sexual needs are used against them. Again, this isn’t seduction, it’s simply brute force.

The erotica is held by a pair of hot flashes with some heat which attempts to bring something to the work, but it cannot overcome the lack of interest in the characters themselves, or how things are told in the story. It is the tone of the writing, and the issues with editing that are this work’s downfall most of all.

The writing tries to tell a story but there are so many issues with tense, spelling and word choices that at times the story faded away for how many mistakes caught me. The other problem was the dialog between the characters which just didn’t sound right at all. It was stilted, uneven, and at times the characters sounded like robots rather than anything else.

The story itself, the universe, seems to be interesting, but it can’t get past the editing errors and that it the biggest problem. In the midst of the erotica to have grammar mistakes and tense errors just doesn’t help keep the heat building. It’s like a bucket of cold water and it shouldn’t have been. Add to that an incubus that is, for the most part, very stereotypical in his actions and this becomes a work that just didn’t have the heat, or the story, that it could have been.

The work needs a serious editing for all of the tense and word errors. As well, the dialog simply sounds wrong and needs to be embellished. There is a story here, it could be quite a good one, but when the lack of editing strips the enjoyment of the story away that isn’t helpful.