A Review of Duncan’s Tale by Roxane Crawford

A Review of Soul Touch by Paige Coal 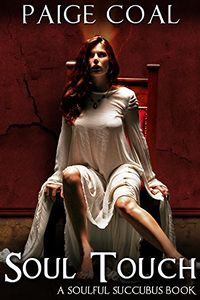 A review of a new series that started this month called Soulful Succubus this time on the Tale. There’s quite a lot to like about this opening work in the series as a whole. The main character has a mystery about them, there’s a undercurrent of a succubi/incubi society as well. The main character might not be exactly as they seem, but then many of the other characters seem to be hiding things as well. It isn’t quite erotica, it’s more of a mystery as a whole, which I particularly like. The problem, at least for me, is some of the violence is a bit too far over the top for my tastes.

If one is not whole with what one is, there is the chance that events will draw you towards being that which you do not wish to be. Being forced to choose isn’t a choice and being lied to isn’t an answer. Sometimes all you have are the voices in your own mind and when they aren’t telling you what you need to know, that’s a real problem.

Annabelle Pence has been living a fairly ordinary life, even while being a non-practicing succubus. Everything’s going perfectly—until she receives a certain little necklace. The necklace is the property of Lord Ezra Incus, and he’s not too happy about it being stolen. It doesn’t seem to matter that it was gifted to her by someone else. Lord Ezra brings Annabelle to him and forces her to make a choice. Oh yeah, the kicker? He couldn’t care less about the necklace. What he wants back is the life that was stored in it. All one hundred years. Ezra’s going to have every second back or he’ll murder the people close to her. That’s just one of Annabelle’s problems. Since touching the necklace, something strange has woken inside her. Something dark and controlling. She’s losing time and sharing her body with this new presence.

It’s a losing battle, and she’s fighting two fronts. Losing her mind and her body. Will she be able to fight her way out or will she lose herself completely and give over to the darkness inside her?

Annabelle, better known as Anna, doesn’t like who she is. As such she doesn’t act like a succubus, nor does she wish to fall into the trap being one represents. But a door opens within her, things change, and there’s a voice inside that wants something from her. But then there’s a lot of people that want a lot of things. Holding onto one’s humanity in the face of the inhumane is a battle that Anna will face both within and without herself.

The story is, at its core, a mystery about Anna herself above all else that is happening. There are two sides to her character it seems, one that knows what’s going on, the other hasn’t a clue and the conflict and contrast is quite strong and telling. The balance between the human side and the succubus side is very stark, almost duplicitous in how things are developed. While I found this really interesting, the part that I didn’t really enjoy was the tendency for the story to turn violent in many aspects for Anna and those around her.

While Anna’s succubus side is temptation and seduction, there’s an animalistic side that I didn’t find an attachment to. While it make sense for the character, it seemed to be turning more towards being a monster than a character and I think that might have taken some of my interest away. Anna’s other self, when she’s scheming, plotting and being “evil” is very well done and I liked that quite a lot. But then things tend to get violent and bloody which bothered me.

That said, many other characters are even more violent, more “heartless” and they didn’t really stay with me very much. The main incubus character, Lord Ezra, was a little two dimensional for my tastes. Being evil alone isn’t all that interesting, thankfully his character turned out to be something more than that by the end of the work which I think made the real difference for me.

The mystery alone is more than enough to hold interest, tell the story, connect the characters. But taking the violence to extremes, at least for me, didn’t work. Yes, much of it was needed for plot, for characterization, for pushing the story onwards, but I didn’t really enjoy it when compared with the balance of the work.

There is a scattering of erotica, a pair of heat flashes that needed more heat, but the events didn’t really allow for that to happen. Overall, the characters are quite good, especially Anna herself, but beyond her, there no real foil to play off her character against save for her other self.

The work doesn’t read as rushed, there is a complete story told, which ends on a cliff hanger to lead towards the next work in the series. It is well edited and overall I did enjoy the work for the story, the mystery and Anna herself. The blood and, at times, gore didn’t work for me however, which took something away from what otherwise I felt was an excellent story and mystery.

I’m hoping the story focuses more on Anna’s internal struggle and that struggle is more than it has been. At the same time, there’s a mystery to unravel and I hope the author doesn’t rush through that. There’s a lot of promise here and I hope to see that come in the future.

It’s a very good beginning to the series and there’s quite a mystery to unfold. I didn’t particularly enjoy the more violent aspects of the work, but that’s a matter of personal taste as a whole. I do think Anna is very interesting, I do want to know more about “the other” and how that all works. The core is the mystery and the feeling that everyone save Anna knows what’s going on, to a point. The question is what happens when the other shoe drops and who Anna really is.

Perhaps that complexity will answer many of the questions left in the wake of this beginning and what comes next.