A Review of Wild Seeds by Syn Root

A Review of The Half-Succubus Gal Julie Direct: The Second Circle Summoner by Heidi Fisk 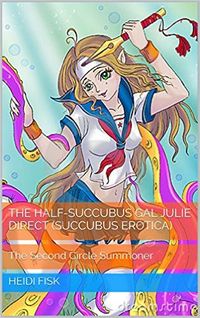 There are quite a number of short stories about succubi that appear now which can be either something really good, or something not so much so. Much of the difference comes from the writing, the dialogue and the characters. But the singular point that matters most is some kind of effort made to edit the story into something that is comprehensible.

Telling a story that has no focus, seems not to know what comes next, other than the main character, and then falls into a series of scenes that have really nothing connection them is a problem. More so when what little story there is just doesn’t go anywhere at all by the time the last paragraph appears.

Julie Direct was just a girl who loved sex, at least that is what she thought as first until a mysterious book her mother left her started summoning demons that wanted to have sex with her. That isn’t even getting to the nun with a penis.

Julie is know for being oversexed but really doesn’t know why. Finding a book her mother left her takes Julie to learning she is a succubus and while that explains a little, she’s still as lost as she ever was.

The work is, overall, a very difficult read because of the many editing mistakes, wooden dialogue, disjointed sentence structure and most of all, a seeming lack of where the story wants to go. It reads very much like a stream of consciousness, never really settling into any kind of meaningful story at all.

The work needs a serious editing, time spent on actually telling a story instead of running around in circles, and, most of all, some kind of focus. There is a story here, somewhere, but how it is presented just makes it so very hard to find among all of the editing mistakes.