A Review of Making The Incubus by Benedict Palantine

A Review of My Incubus by Jack Stroker 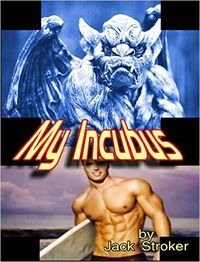 My Incubus by Jack Stroker

One of the things that a story needs is emotion. Whether that is in the characters, the events that unfold, or something else, without the emotional connection a promising story can become much like reading a cookbook. All of the ingredients are there, but you can’t eat the pictures on the page to know what they are like.

A needy mature woman is visited by a handsome demon and fireworks result.

Vivian finds an incubus in her bed. A deal is struck, the papers signed and then the debt must be paid. However things don’t go as the incubus expects, and then Vivian finds that when a deal is broken there are consequences.

Overall the one thing that this work is missing is emotion. The main character, who’s name really isn’t mentioned until well into the story, Vivian, narrates the work and the singular thing about her tone is that she seems almost bored in the telling. She speaks of things happening in passing, some vague comments about what the incubus, who’s name is beyond silly, is like, but there’s little to no detail otherwise.

Even in the moments of erotica, there really isn’t any. The telling reads like a summary, a short ‘he was amazing’ and nothing more than that. It becomes a bit more odd when Vivian manages to turn the tables and then the story moves into the realm of a ‘fish out of water’ story for the incubus.

That could have really worked, been something interesting, but instead everything that he experiences, outside of being in Vivian’s apartment, is only mentioned in passing. As well, the job he finally manages to win is less than a surprise, seems obvious, and, again, that could have been something for more conflict between the characters, telling of what happens to him, but it’s glossed over quickly to move the story along.

Eventually the devil makes an appearance, and even that is mainly told in summary with the occasional short interaction between him, Vivian and the incubus. There are some cute moments in this, some temptation for Vivian, but it doesn’t get played out.

Perhaps that’s the biggest problem with this work in that there’s a lot of good ideas, the characters have some promise, but none of that really gets used. I feel like there’s a very good story underneath this one that seems to be summarizing the better one in passing. I would have liked to have read that story.

A story without heart, without emotion. Characters that do not develop much, and the ending left me wondering what was the point of everything that happened in the first place. Much like the story itself, the ending… just was. Emotionally there simply isn’t anything to hold onto as the story unfolds, the characters I wanted to care about, but couldn’t.

More time spent in adding flair to the words, less summing up of events and more telling of them would have helped a lot. Erotica with heat would have as well. It’s hard to say if this work is more of a comedy of errors than anything else, considering what the characters go through. Personally I just didn’t find my way in and I wish I could have.

There’s just no emotion in the work to speak of. Vivian seems to sleepwalking through the story, and even with the occasional bits of humour, the work didn’t hold me as I would have liked it to. Perhaps the rather short book blurb should have been a clue that the idea is there, but the details aren’t. In the end, story matters, and not using that story, telling it well, seems to leave much to be desired. Which, all things considered, is telling.