A Review of My Incubus by Jack Stroker

A Review of Making The Incubus by Benedict Palantine 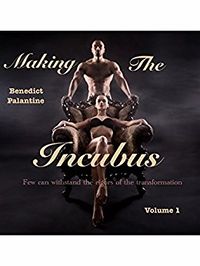 Making The Incubus by Benedict Palantine

There is a difference between telling a story and simply describing it. Focusing on action rather than plot or experience rather than developing the characters can be an issue. Beyond that, telling the story in a series of long, never ending pages without a break, or paragraph for that matter, strains one’s ability to comprehend what is going on.

Steven Bridemoore never considered himself special. He was strong and handsome with a powerful libido, but all of this seemed fairly commonplace. Now that he is captive to a hyper-sexual coven of demon Succubae, he is learning a lot about himself. The questions continue to torment him, though. Will his body be able to hold up under his new and raging hunger? Will his psyche remain intact as the new and addictive pleasures consume him? Forced onto this path by his wickedly seductive Mistress, he has no choice but to give in and follow it through. He wavers in and out of consciousness with each awakening bringing about new hungers and new overwhelming pleasure. Will he survive being made Incubus?

Steven awakes to find himself at the tender mercies of a group of succubi with one thing in mind. They need an incubus to help them survive and he seems to be the right man to be transformed. Piece by piece he’s changed, altered, becoming something more than he was, but along the way, there are always stumbling blocks and problems to overcome.

The work is, at its core, a story that wants to tell about a man being pleasured, over and over again, by succubi until he goes over the edge and becomes an incubus. At least that’s what seems to be going on, but it’s hard at times to be really sure about that. The story wanders in many directions, characters pop in and out, side stories appear without any reason why they matter. There are quite a number of spelling and grammar mistakes, the dialogue reads very oddly as well. The characters are skimmed over, there’s no development save for the occasional commentary about the characters.

What is the hardest thing however is how this author presented their story. Each chapter is, for the most part, one long, never ending paragraph. A wall of text that goes on and on, never breaking into smaller, more understandable paragraphs. Perspectives change, events unfold, scenes change and it all happens in that wall of text. That hurts the story, makes it hard to keep one’s place in it, and by the time the ending appears, I was left wondering just want was going on.

The story is told in a rush, almost like a summary of events. It’s a shame because some of the points that come up would have made for interesting chapters on their own, but the author moves far too quickly onto the next thing to be shown and leaves those plots to be forgotten. There is a story here, but what this work projects is something like a overview of a larger work, telling of the highlights, mostly sexual, occasionally plot and character ones.

The work needs a serious editing, the wall of text has to go, the dialogue needs to be improved, the characters need to be developed. The transformational aspects of the story need to be told more, the change in the main character should be more focused on. The side story that appears need not be, at least in how it was told, for it didn’t seem to matter at all, or make a lot of sense.

In short, the story needs to breath, to find itself. It’s not given that chance and that’s a shame because there are points that I thought had a lot of promise. Getting that promise out from under the lack of editing is where things start.

The work is best described as a wall of text that needs a lot of editing and some kind of an attempt to tell a story rather than simply go on about sex. I think there’s a story here, at least there’s one trying to get out, but the presentation makes that difficult to comprehend.

Seemingly this is the first book of a series, but if the next work tells its story as this one did that will be a shame. Having a story to tell is one thing, telling it well is quite another. Care and effort can make that happen and I hope this author can do both.