A Review of Jasmine’s Incubus by Dixie Richards

A Review of Passion’s Price by Alana Church 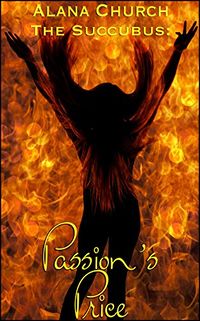 I’ve been captivated by The Succubus series by Alana Church from the beginning. I’ve loved each character, the love, the story, it’s been, in many ways, speaking to many of my personal beliefs about succubi. Today a review of the eighth work in the series, possibly the last, but, there is always hope isn’t there?

We are nothing without hope. It is not love, nor need, nor life itself that gives a reason to be. Hope, in whatever form we need for our own souls to find peace, matters. Sometimes the greatest can lose hope and sometimes that hope is found anew in a soul that believes.

The end has come. In the final chapter of our story, Althea, the immortal succubus, knows that the confrontation with the demon-spawn Kincaid is near. To lure him into their trap means putting the entire family in harm’s way. And even if she succeeds, will the love they all share survive? Because when all you hold dear is at risk, sometimes you have to pay…Passion’s Price.

Althea knows the time has come, her family is at risk, she must take up the mantle of protector once more. A sword alone isn’t enough to take into battle. The shield she carries is her love, her heart and soul. Her will demands she confront that which threatens all she cares for. But with all of that, there is one thing she cannot overcome, not without help, should she be willing to accept that which she’s denied for so long.

What strikes me the most about this work is that within the pages we see Althea at her best and at her worst. She’s forced to come to terms with the pain she’s been carrying inside for so long which results in what is, for her, the most heart wrenching moment of the series by far. She’s always loved Rachel, her family and Yasna, but she’s never really been able to have the one thing she’s been wanting for so long. It takes a lot to break that truth out of her and when it comes it makes total sense and explains much of her personality and drive.

In the same way, there are some telling moments for Rachel, Yasna, and the family as well. They face a hard fact, one they cannot avoid, and how each reacts was true to them all. Not everything is wonderful emotionally for them, but at the same time, there is a telling moment for each as a character, to push them towards a focal point and that was very interesting to me.

While there is conflict, the climax of the series takes place in a way that gave truth to the succubi, to those they face, and, at its core, the question they face. The answer to that question, the offering of a reason to be more than just “because Goddess says so” was all that I could have hoped for.

There are some lovely soft and passionate moments of erotica which give rise to some needed truths for two characters. Both were perfect in how they developed, gave rise to the story and didn’t take away, but rather added much to joining the pieces of Althea’s soul. There is humour, dearly needed with all of the seriousness that come in this part of  the series. The mixture of light and darker moments tells much about this universe, the souls within it, and in doing to makes the story become alive.

There are one or two little tiny editing mistakes, but they don’t take away from the passion, the story, or the characters. The series has remained true to the core plot, the characters themselves and in this work the ending brings about a satisfying conclusion.

There are, of course, some story plots left open, the appearance of two characters that made me smile, one in particular for which I was thrilled beyond words to see. The emotional connection is delightful, the resolution of Althea’s arc made compete sense. Most of all, the gift which appears, in all of its forms, is one that’s perfect in so many important ways.

I’ve loved the series from the beginning, I love it even more now. Althea, Yasna, Rachel and her family are dearly loved for all they represent and have been. One of the most delightful, passionate series about succubi that I’ve read in some time. I dearly hope Althea’s story will continue, but if not, knowing her has been a dear pleasure to me.

Everything that I could have hoped for, an ending that I loved dearly and spoke to me in a way that only those that know me will understand. While this is billed as the last work in this series, there is a bit of hope in the words “The last? work” which I dearly hope that this isn’t.

Promise. That’s what this series has and perhaps, in time, the author will tell more. I, for one, will be watching with joy and love always…