A Review of Incubus by Raine Weaver

A Review of Halloween Bimbos by Mr. SIB 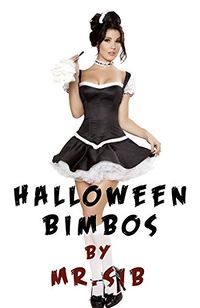 A review of an anthology book which has two stories that were of interest to me, one with a succubus, the other with an incubus. At least they interested me until the ending of each story where things turned out to be, sadly, rather stereotypical.

There are some stories and characters that offer something, suggest possibilities. The problem comes when the the story turns into a hot flash with no real direction, no purpose and no character development to be seen. A story can be short, to tease and tempt, but that alone doesn’t make for a captivating tale to be told.

This hot Halloween collection includes three stories guaranteed to scare and thrill you! Each story is full of scares and sex!

A collection of three stories set in a Halloween theme in which things aren’t always as they seem and not everything is as those involved might expect.

Of the three stories in this collection, the first and last are the two that I’ll be focusing on. That said, each of the works is a hot flash, mainly concerned with erotica and having little in the way of real character development as a whole. Each work is very short, the characters being introduced and the story moving on to the erotica as quickly as possible. While that works to an extent, there’s something missing from the stories overall and I think that comes to one simple thing. The characters are somewhat one-dimenional and I thought that hurt the stories overall.

Turning to the first work, a guy meets a girl and things turn in unexpected directions as they become intimate with each other. Not everything is as it seems and sometimes what comes out is more than you can handle.

The work, overall, is a cute hot flash that has some heat, but doesn’t really come to a full boil. The female character is never named, her entire focus is doing all sorts of interesting things to the male character of the story. The reveal at the end of the story wasn’t exactly unexpected, all things considered, and it worked as a whole. But while the ending was a twist, the last lines of the story took all of the heat away, leaving me rather cold towards the ending. It was just too stereotypical for my liking, it could have turned in other directions, but didn’t leaving what came as disappointing overall.

The second work tells of a witch summoning an incubus, and the problems with assumptions, mistakes and not thinking before acting. Not everything is true and not everything is as it seems. Telling the difference, or not being able to, can change more than one knows.

All that said, the incubus is one-dimensional, stereotypical, and in being so I didn’t find them interesting as a character. They are very dominant, very masculine, which I can accept, but they fall apart as a character for not having much other than the thought of using the witch for their own ends.

Part of that is, again, the length of the story, the need to focus on the erotica and leave much of character development and storytelling behind. It’s a shame because the story, overall, could be expanded and something more involved and interesting coming from that as a result.

Really that’s the one problem here. The story ideas are good, the characters could be more than they are, but being short, hot flashes, there’s no opportunity for that to come out as it really needed to. The collection is a starting point for something more. It’s a shame that the author didn’t try to take each story and make something more of them all things considered.

For the collection of stories as a whole: Two and a half out of five pitchforks.

I expected more than there was, I think there could have been more story told alongside of the erotica itself. I didn’t enjoy that the succubus was stereotypical, or that the incubus was as well when each story came to a close. Twists and unexpected surprises are, perhaps, overused for the most part. Sometimes telling a story doesn’t need a twist to make it a story. Sometimes the story is, after all, the story.