A Review of Vampires and Angels and Incubi, Oh My! by Ann Anderson 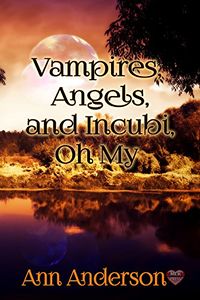 Vampires and Angels and Incubi, Oh My! by Ann Anderson

The single thing that I do like to find in stories is that there is character development. Having a character go through a number of events and then be exactly who they were at the beginning doesn’t add much of anything to the story as a whole.

It’s the mystery of why things are, who they meet, and what happens that serves to tell the story. Hot alone cannot, nor can any sort of tease or action scene. Story always matters and it is the characters that tell the story in the first place.

All Ashuerin wanted was a night of feasting in the human world, not to defend a bunch of humans and a melancholy vampire.

Ashuerin snuck out of the dream plane to enjoy a bit of fun, but instead of taking up with the hunk he finds, Ashuerin finds himself helping to protect the humans and a random vampire who should definitely not be in a human bar. Even a simple fight against a bunch of zombies doesn’t go as planned and Ashuerin finds himself heading toward Death’s door, except the angel who tried to kill him is now saving him. What’s an incubus to do?

Ashuerin sneaks away to find a night of fun, pleasure and perhaps some fun along the way. What he didn’t expect was to find an angel and a vampire. Or the zombies, or the other beings that really should have been anywhere save in a human bar drinking.

Ashuerin is the incubus of this story and from the first page its clear he isn’t the typical stereotypical sort of incubus one might expect. He has a very clear view about being an incubus, that he won’t kill or harm those he is with, and I liked that for the sake of putting his character clearly into who he is before the story got too far along the way. As well, Ashuerin’s sexual preferences are masculine in nature, again something that makes his character different. His personality is quirky, there’s a certain mischievousness as well that I liked.

The work is short and as such there are some developments in the plot and characters that felt a little skimmed over. Some details are mentioned, but vaguely. There are some moments that could have been developed further, but weren’t. However, in spite of the shortcomings, the work as a whole tells a unique and unexpectedly captivating story that I enjoyed.

The characters are rich, the writing is very good and well edited overall. I did feel that there wasn’t quite enough background about Ashuerin, the angel or the vampire in the story. Ashuerin seemed to know what was going on, had some tidbits to share, but really there isn’t the level of detail that I would have liked to see.

There’s a sense when the climax comes, the revelations appear and then the ending arrives that this might be the opening to another story to be told. If not, then the ending is a little too abrupt for my taste, leaving the explanations vague and open to interpretation. That isn’t the worst of things to happen, to be clear. Still, the questions offered in the ending would be something to explore further and think about.

Overall a cute story with three characters intertwined that I think worked well as a whole. Keeping Ashuerin from being stereotypical was something that I was dearly glad to see as it could have turned in another direction too easily. I’d like to see more from these characters, the work ends on a point that offers that possibility. There are quite a few things not delved into about Ashuerin and his family, incubi, succubus and otherwise that I think would be neat to see.

Something different that tells a story, allows for heat and develops characters. All are really good things, I’d just like there to be more of a satisfying ending that what the author gave here.