A Review of A Succubus for Halloween by Zayna Noble

A Review of The Haircut by Lusty Soul 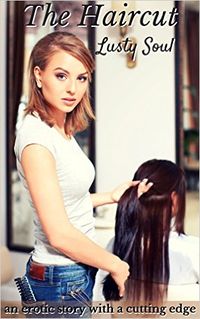 The Haircut by Lusty Soul

The thing about book summaries is that they offer a glimpse at the work in question, but cannot give everything away. But such summaries that tell a part of the story, one that is tangential to the core story, tend to suggest there’s more. Something different, something unexpected.

A work that tells a story about a succubus is one thing. A story that tells about the trials one soul has faced all their lives is the more gripping and amazing one.

Lucy, a succubus still coming to terms with her special nature, falls in love with her hairdresser. Elbe isn’t the type of girl she usually falls for, but after seeing her stand up to her bigoted brother, Lucy is impressed by Elbe’s confidence and energy, convinced there’s more to this girl underneath her shy and timid personality. She offers Elbe her friendship, which quickly turns into scalding passion. But Elbe’s brother, in his religious zealousness, isn’t so easily deterred…

Lucy finds herself enamoured with Elbe, wanting to know her more than just as her hairdresser. There’s a connection, and for a succubus, that’s a rare and wonderful thing. But Elbe has a problem, her brother, and when Lucy and Elbe’s passions grew, the problem becomes more so. But as well, the connection becomes something more and a secret revealed changes everything.

Lucy isn’t anything like a stereotypical succubus, in fact she’s quite clear in the midst of the story to state that. I liked that her means to survive is the feeding on the sexual pleasures of those she is with, creating more pleasure for them which then gives her more in return. It’s a lovely arrangement, one that I feel works really well and has something special within it to offer.

The story is a dance between Lucy and Elbe, the two flirting, playing, slowly becoming more serious in their attraction to one another. This is told in a passionate, loving way that doesn’t simply move the two characters into bed together. There’s a strongly written plot, a story that as it unfolds is captivating and more.

There is a twist in the story, really it is one that comes unexpectedly, but when it happens, that moment is special. It’s hopeful, there is a connection made, an understanding and acceptance by Lucy of who Elbe really is. Telling that story, telling about what happens through that connection, the effects that Elbe’s brother has on that, takes this work into a place, an emotional level, that I couldn’t turn away from.

The work doesn’t focus on the erotica to the exclusion of all else, but when it comes into play there’s nothing odd about it. It is a loving, caring kind of erotica that offers a glimpse within both characters, telling of them and reinforcing the overall story really well. I am not going to spoil the twist which happens during one moment, it’s just so really well done that one needs to read the story and see how that all plays out.

The characters are wonderful, the emotional connection with the reader is some of the best I have read this year. The work holds you fully, needing you to turn the page, to see what comes next. The atmosphere is rich, the scenes are detailed. There’s so much to like in this work and I am quite pleased with what the author has created.

I do wish the ending was a bit less abrupt however. The final scenes offer much, but the ending just comes up a little short. I would have liked a little more closure, perhaps a hint of what comes next for Lucy and Elbe. What happens before the last pages is important, and how things comes to a close just doesn’t quite match all that comes before. The strength in this work are the characters, and in the last few paragraphs, something was missing.

A twist in the story that doesn’t take away from the characters, a connection that matters and a story with feeling, love and promise. Really all that I could ask for, and much that was unexpected, but cherished as much as the characters are.

I just wish there was time spent in telling the after more than there is. The author notes “the end of the beginning” as the work closes… I do hope that’s true.