A Review of Broken Wings by Rebecca R. Pierce

A Review of The Coed’s First Futa by Jocelyn Saragona 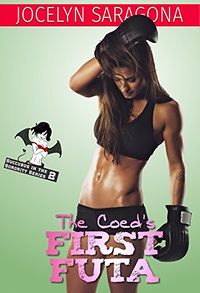 In the prior review, I noted that the author needed to edit this work more, which they have in this, the second work in the series. I hoped they would improve on their dialogue, which they did as well. But I also wanted to have Sharis grow as a character, telling moe about her, taking her from being a means for sex into something more substantial of a character.

Two out of three is a good thing really.

Meghan is one tough, kick-boxing coed conflicted about her sexual temptations. Her purity ring tells her one thing. Her make outs with a hot guy tell her another. Only vigorous work outs keep her sexual cravings in check. That backfires when Meghan catches her exhibitionist sorority friend having sex with a futa. After that unbelievably steamy encounter, Meghan’s unexpected bisexual desires won’t go away. She finds the sexiest Halloween costume ever -if only it will make her brave enough for her first time.

Meghan’s life is complicated. Promises made, thoughts of need within her enflaming her passions. Her friends seem to understand, but when Meghan discovers that her friend Sharis isn’t quite what she seems, things change for her and her options open. But along the way, there are always bumps in the road to overcome.

While Sharis, the main succubus character of the series does appear, the work isn’t about her, or really connects to the prior work in any really meaningful way. It’s like all that happened before, including the appearance of Jacquette, a very dominant succubus, never happened. There’s little told of Sharis being a succubus, she’s never described as such either. Without being aware of the prior work, it isn’t clear that Sharis is a succubus in the first place.

That said, her character does develop a little bit, though some of the events are a little thin, not delved into or explained well. In the same way, the little bit of erotica that Sharis appears in really doesn’t have a lot of heat, seems to be added for the sake of doing so and doesn’t amount to much. This makes sense from the point that this work is about Meghan, and it’s understandable, but that’s the problem here.

The prior work ended in a way that I really wanted to see move onwards, to expand the universe, to tell more about the succubi that live in that world. Both Sharis and Jacquette had a lot of promise. Why that plot thread was tossed aside for a story which, overall, didn’t have much of a connection to the first work in the series bothered me.

However, as erotica with meaning, with a little bit of romance and a lot of story wrapped around Meghan’s coming of age, her choices, and the events that come from that, the work reads well, held my interest and I liked it overall.

This isn’t a story about Sharis, or about succubi really. It’s a coming of age story for Meghan overall. For that, the work is really well written and I liked the character development that came as well. I still want to see more of Sharis, developing her character more. It seems like Sharis is being worked into the background, not the focus of the series, but instead a means for some futa sex to be told. The little glimmers of her character I liked and, perhaps, the next work will give more of that.