A YouTube of the Queen of Pain in Dota 2

A Review of The Coed’s First Futa by Jocelyn Saragona

A Review of Broken Wings by Rebecca R. Pierce 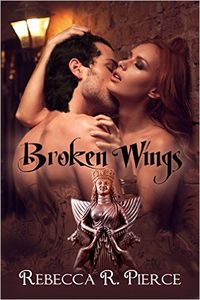 There comes a point when we all look into who we are, where we’re been, and what has happened to us. Many times in doing so we lose a part of ourselves in the exploration. At the same time, if one is inclined to doing so, a soul can find their own truth, what matters to them and puts themselves on the path to something better.

Sometimes a change can do you good. Sometimes that change comes in more ways than we imagine. The risk is there of course. The challenge is taking that risk and seeing where it leads you.

When Valerie Tempest gets dumped by her live-in fiance, she panics, and suddenly needs to be “anywhere but here.” That impulsive “anywhere” finds her on the next flight to Istanbul, far away from any family, friends, or colleagues. A foreign land, a wrong turn, and an impulse buy of an ancient relic puts her face to face with a sexy genie named Kahlil. Is he everything she could wish for, or should she travel on?

Valerie finds herself far from home, thinking about her life, what’s happened, and where she goes from here. Alone, seeking herself amongst the ebb and flow of where she finds herself, things change. A connection is made, a life begins anew, and along the way, Valerie discovers that what she thought was her life was only the prelude to something far better.

The central focus of this story is that of Valerie’s character development most of all. While Kahlil has much to do with that, guiding her, offering her things to think about, and pleasures which Valerie’s ex didn’t seem to care about, the entire work revolves around Valerie’s own need to find herself, decide what she wants to do, and then make the decision to be herself and not what others want her to be.

The progression of Valerie from accepting how things are, just going along with things, to the more fully realized, mature, and most importantly, self-assured woman she becomes isn’t something that makes no sense. The seed of who she becomes is there from the beginning, it takes Valerie making a choice, holding to that, which turns the story forwards.

When Kahlil appears, the interesting thing about him is how he sees himself, what his reality is, and why. There’s a moment in telling his story which, for me, spoke to a certain view that I have about succubi and incubi and at that moment the author fully had me involved. Kahlil isn’t stereotypical, isn’t what one might expect him to be. But that’s clear from the moment he appears and he never betrays himself and his own truths.

The way both main characters are drawn together is told in a way that doesn’t rush headlong into over the top erotica. There is time spent for them to meet, touch, feel each other’s pain and needs in equal measure. That building up of their connection, the passions which come to the fore, is what needed to be told carefully and it is here. When the story turns to being erotic, it simmers at a low boil, a creeping desire that I thoroughly enjoyed. There isn’t a moment when the entwining of Kahlil and Valerie feels wrong, or out of place. There’s a connection which isn’t a fleeting one, it lasts and it makes the work so much better.

The conclusion is emotional, pushing Valerie into a place where her own truths, and that of Kahlil, create something that worked perfectly for them both, closed the circle of the story well, and I dearly loved the ending for how it contrasted with where the story came from.

The only thing I wished for, was to see the “after” when the story ended. The last words, the last moments, offered a direction for the story to take, even if fleetingly so, and I wanted to see part of that. To see Valerie as she became, what that first moment would be like, the possibility of meeting a certain character mentioned in passing by Kahlil would have I think added something that I think was missing at the end. Valerie wanted to find her equal, her soulmate, her life. The story ends just as that begins. It would have been so lovely to see Valerie be who she was meant to be for so long.

Simply one of my favourite incubi books of 2016. The story is deep, strong and complex, the characters are real, with their souls bared and needs open to be seen. A scene of love, compassion and understanding throughout the story leads to a moment unexpected and an ending that was perfect in so many ways. My only wish is that the moments after the final words were told to complete the circle for Valerie.

I simply adored the story, the characters and more. A very unique and captivating view of the myth of succubi and incubi, of who they are and what their purpose is. Finding oneself is always a promising story idea. Finding oneself and then becoming who you really are is the better story. Here the author created something wondrous, something with heart and soul.

Those are, always, the best stories of all…