A Review of Kissed by Temptation by Deanna Chase

A Review of The Story of Lilith: The Mysterious First Wife of Adam by Johnnie Hogue 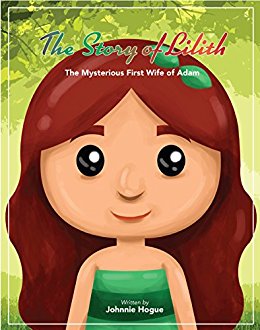 The Story of Lilith: The Mysterious First Wife of Adam by Johnnie Hogue

There have been, are, and will be, many works that attempt to tell the story of Lilith, her mythos and how that relates, in many ways, to the story of Adam, Eve and the Garden of Eden. Many of these works are written for a more adult audience, one that can accept the questions raised, the thoughts expressed.

It is, for me at least, quite a surprise to come across a work about Lilith that can be described as a picture book for children about Lilth’s myth and the story behind it. The thing about writing such a work is that it is very easy to tell a story with a particular slant. A statement about God and the relationship between men and woman. Words that, sadly, express that the concept of equality isn’t possible, and more so that God isn’t in favour of it.

Tone means everything, and some tones, some words used, leave deep marks behind when they are expressed.

This work is described as:

An Illustrated Book to Teach the Forgotten Story of Lilith, Adam’s First Wife.

A picture book that tells the mythos of Lilith in words and images. The story of the first woman seeking to be equal to her mate and finding that he cannot accept that. The pain of hearing from God that she has no value unless she submits and her reaction to that, and the cost she suffers in only wishing equality.

I’m very conflicted about this work, and I’ll explain further, but first I think I should say the positive here. The art is lovely, the characters of Lilith, Adam and Eve look delightful in all of their forms. There’s a lot of joy it seems in the illustrator’s art and I loved the art for that. The art is, at least to my way of thinking, made for a young reader, to captivate them, to draw them into the story and that does work well.

The problem, for me, is how Lilith’s story is told as a whole. There’s a certain viewpoint here which makes me very uncomfortable, especially as the work would be attractive to young readers because of the art. The work states, clearly, that as per the mythos, Lilith and Adam were equal in God’s eyes, but Adam wanted Lilith to submit to him. The conflict described as the work moves past that point makes it seem like God became vengeful because Lilith wanted equality and then spiteful to make Lilith a demoness, or succubus.

Lilith isn’t described as a succubus, her actions as a succubus are not delved into, only that she causes pain to mothers and visits men. But the story pushes a view of Lilith seeking revenge, looking to cause pain and so forth. The work adds that beings like Lilith, who are “fighting against God” are doomed to suffer eventually.

And that statement, more than anything else, is what nags at me. From my perspective, the story seems to suggest that women seeking equality are doing so against God’s wishes. I’m sorry, but I can’t subscribe to that view. What this does, for impressionable young minds, is plant a seed in their thoughts that being equal, respected, a partner in life with men isn’t a good thing. That a woman’s only purpose is to be submissive and nothing more. Because God wants things that way and one must obey the word of God.

God, or Goddess, whichever one believes in, isn’t a cruel being. They want their children to be happy, content, to live and love equally. That, for me, was what the Garden represented. The expression of why Lilith and Adam came from the same dirt. The desire of their children, all of them, to live together, be together.

Lilith expresses that need within to be equal, to have value, to be a partner, to share in the life given for the greater good of all. That’s not an evil thing, that’s not an expression of being against God’s wishes. It is, however, the expression of the need for all souls, regardless of they being male or female, to see each other as equals.

This work, placed in the hands of young souls that do not understand, that cannot make up their own minds, will tend to push them to think in a way that doesn’t allow for equality. That’s the greater shame here. Lilith’s story, though not part of the Bible, matters in the here and now. It means something in the world we live in. It is meant to make us think. We should be.

I’m not giving this work a rating.

I find myself unable to separate my dislike of the tone used, the expression that women shouldn’t be equal to men. The words used press home the idea that God didn’t want women and men to be equal, even though, at least in the story of Lilith, both she and Adam came from the same dirt.

There’s a conflict in the telling, an expression of somehow “putting women in their place” which is telling.