A Review of The Story of Lilith: The Mysterious First Wife of Adam by Johnnie Hogue

A Review of Kissed by Temptation by Deanna Chase 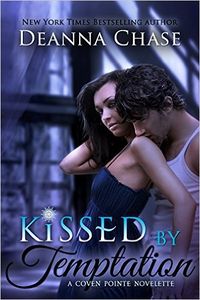 Kissed by Temptation by Deanna Chase

The second of two reviews of works in the Coven Pointe series by Deanna Chase, and you can find my first review here on the Tale. One thing I noticed was that this second work in the series appeared almost a full two years after the premiere work did. Now, in the meantime, the author continued their Bourbon Street series, releasing a number of works in that series.

Continuity between works in a series is an important thing. Reading one work and finding a character has come into their powers, with seemingly no understanding of them sets up a certain expectation. Moving into the next work and finding that character has a sudden mastery of what they can do is a bit jarring.

While that can be overlooked by the story they appear in, another trap can be creating a force of evil that is, sadly, stereotypical in their nature and their actions. While that can just be a means for telling the larger story, if that stereotypical character is exactly that and nothing more, it becomes rather disappointing.

The last place sex-witch Mati Ballintine wants to be is at a holiday sorority party. But when the high angel from the council orders her to protect a new angel recruit, she has no choice but to go and grit her teeth through the frat boys’ advances.

The night turns from bad to worse when a demon appears and is hell-bent on taking the angel to Hell. Mati and her incubus boyfriend Vaughn will need to combine forces to not only save the angel, but everyone else the demon leaves in his wake.

Matt’s list of problems has gotten longer. Now responsible for an angel, working for her sister, and then getting invited to a sorority party held by witches is painful enough. When an incubus appears, and it isn’t her boyfriend, then trouble is brewing. When her boyfriend does appear, then things turn to a boil.

Being that this work was released almost two years after the first in the series, there’s a feeling of a lot of time passing, a lot of events going on with both Mati and Vaughn, but the problem comes in that the author doesn’t really delve into what’s happened between the end of the prior work and this one. References are made that hint at things, but not in a detailed way. For Mati, that’s more of a question of how she got into the situation she’s in, and why it happened. For Vaughn it’s quite a lot more confusing as he’s moved from “just becoming” an incubus into being one that has a lot of power, is part of a larger group, and seems to be more mature and developed a character than he was in the first work.

And there’s the problem. The shifting is jarring, confusing, and having not read the main series by this author in which I assume that all of this is explained, things didn’t quite ring true. As well, the popping up of characters from the other series in passing, the dropping in of other characters that Mati knows out of hand, but the reader doesn’t leads to more confusion.

That then brings me to the “main evil” in this work, which is the appearance of another, unnamed incubus. I don’t like characters that seemingly have no plan, no real personality, and seem to be in the story as cannon fodder, or a means to an end. An incubus that only seems to care about having sex with another character, and being singularly focused on that, is boring. Such characters are doomed to fail and that’s clear from the moment this one makes his presence known. Everything is pretty much expected, there’s nothing which shows some sort of intelligence, planning, or even a semblance of a scheme. As such, while some of the scenes are cute, occasionally funny, and have just enough to keep my interest, the unnamed incubus really doesn’t amount to very much and I wish they had.

There’s really not much in the way of erotica in this work, though there are some wonderful romantic moments that I adored. The work is mainly an adventure/mystery and it manages to make that work overall. The issue for me comes from the disconnect from the first work to this one and the threat, which wasn’t more than it appeared to be.

The writing is stellar in how scenes are described, Mati’s thoughts and actions, and overall there’s quite a lot to enjoy overall. I just wish there was more to be found in the main plot, how it was resolved, and, most of all, a better connection with the first work in the series. Explaining Vaughn’s shift, or perhaps more on an explanation of how time has passed would have made the difference.

I wanted to like this work more than I do, but the unnamed incubus being so very stereotypical took away so much from the work for me. Mixed into that the sudden unexplained shifting in Vaughn’s abilities and my confusion grew. Then putting Mati’s new situation into things, and not really explaining much about that save in passing, left me lost and at a point where I had to push all of that aside before it overwhelmed the story for me.

Again, much like the first work in this series, the author is assuming that someone is familiar with their main series and I think that’s a bit of a mistake. Sometimes a story is interesting on its own and it needs to stand on its own merits. There shouldn’t be a need to read another entire series to gain understanding. A little more exposition in setting up the moment would have helped me to get past the changes from the first work. A stronger incubus as an opposing force, one with a mind, a scheme, and a plan other than just “being evil” would have helped too.