A Review of Pact of a Succubus by Leona D. Reish

A Review of The Succubus Hunter by Abbey Lynn 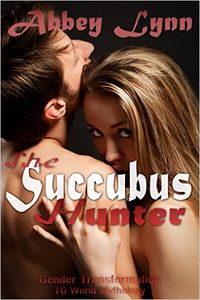 The Succubus Hunter by Abbey Lynn

One of the things that draws me into a story is when there is more going on than what the main characters deal with. That there are other succubi, a society in which they work towards a common goal and purpose. To me that’s interesting, it means that the succubi aren’t what one might expect them to be. The only issue I have is when the story teases this, and then really doesn’t delve into what that means.

There is such a thing as perspective. Everyone has their own of course, some more focused than others. Sometimes there comes a need for that perspective to be changed. How that happens can change one forever.

In the colonial era, huntsmen have been trained by the church to track down and kill succubus demons that have infiltrated the local villages. During an evening hunt, Nicholas gets separated from his companions in the woods and stumbles across a beautiful naked woman. Soon he realizes she’s the prey he’s been hunting, but her seductive powers prove too strong for even him.

His companions eventually rescue him, but it may already be too late. That night Nicholas begins to change, becoming more feminine, discovering a growing lust and hunger toward his fellow hunters. Transforming into a female succubus, the former hunter suddenly becomes the hunted. And Nicholas must choose loyalty between the brotherhood of hunters he once swore allegiance, and the new sisterhood of succubi she now unquestionably belongs.

Nicholas encounters a succubus and is drawn into her orbit. Saved, or so it seems, by his fellow hunters, Nicholas soon finds that there’s more than one succubus in the town. Soon Nicholas finds himself becoming a succubus as well, which opens up secrets about himself, the world around him, and what he thinks the truth is. The past tells a story and when it is revealed, then the future can be found.

The level of detail in this work is some of the best I have read recently. All of the characters have a background, a history and more. There’s not one character that appears to be in the work for no purpose at all. Being so, as Nicholas’ story is told, there’s a great deal of character development that swirls around him. Over time, through his encounter with one succubus at the beginning of the work, and another a bit further on, he is forced to see things differently, to lean things that, for the time this work is set, aren’t the sort of thing that would normally be.

The main focus is set on Nicholas’ transformation into a succubus, which is one of the more unique ones I have seen. There’s something like a hierarchy with the succubi in this universe and I found that to be interesting. The telling of Nicholas dealing with that, with having to confront another succubus who knows more than she lets on, provides a plot and growth in his character, eventually to be a her character, that was well thought out and made a good deal of sense.

There are two succubi that appear in this work, the one Nicholas first encounters who really nothing is told of, but she’s very much a succubus in how she captures him, draws him to her and what happens between them. The description of that scene is quite well done, the succubus mind control aspects I rather liked. Eventually we are told her name, Desdemona, but nothing else. I’ll also add that how her life ends is somewhat uncomfortably written, making me cringe a bit as Nicholas describes what happens during that.

The other succubus in the work, Constance, is far more fleshed out, having a history, a purpose, a meaning for her existence and how that ties to Nicholas. She is slightly confusing at times, her attitude towards him going in many different directions before things settle and the story continues towards its resolution.

The transformation scenes which Nicholas passes through are well done, not having many missing pieces to the puzzle as it unfolds. The transformation leaves her uncertain, looking for answers, and that brings Constance fully into the story. This then brings the background of succubi in this universe, how they exist, what they deal with into focus. I found this part of the story the most interesting to read.

The society spoken of I thought was, to a point, actually more interesting than the story of Nicholas. From what little was revealed of that society’s goals, its culture, its rules and the ceremony that occurs in the story between Constance and the transformed Nicholas are quite telling and intelligent. The author spent quite some time thinking about these points and making them more than a passing thing in the storytelling.

However, as much hints and otherwise the time spent in telling about the succubi society, it doesn’t really amount to much more than the edge of that story being told. I felt that this was my singular disappointment in the work. All of this promise, all of this story to be told and it only is done so fleetingly. I wanted there to be more time spent in that world once the climax of the story came, but that didn’t happen. Once that moment was past, the story came to an abrupt, if hopeful close far too soon.

Strong characters make things work something special. The plot, how detailed things are add to that by far. The issue comes in offering something more to be told and then taking it away before the story really can get past the choices being made and the future being promised.

A very good, well written work with interesting characters and story. I would have liked to know a lot more about the succubi society than was told considering how much detail appeared otherwise. The work really needs a continuation, something to fill in the missing gaps somehow. Even if that took taking the story to the present day, with the same succubi characters to do so. Well worth reading and I liked it quite a lot.