A YouTube video game scene with a Succubus possession

A Review of Demon Futa takes Revenge by Jocelyn Saragona

A review of Turned into a Succubus: Gender Transformed by the Devil Herself by Lily Fey 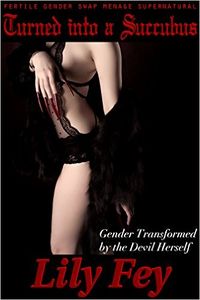 Turned into a Succubus: Gender Transformed by the Devil Herself by Lily Fey

There are some stories in which the ending is pretty much telegraphed from the opening paragraph. There’s little to be surprised over, the characters are somewhat stereotypical in their nature. Such stories tend to turn towards a darker ending, many times having a twist in the work, which isn’t really a twist all things considered.

Corruption of a character into being a succubus can be very trope-like. It really shouldn’t be. But sometimes the main character gets what they wanted from the beginning and so the story fits that purpose. The story holds to that darker form, that expression of evil only. I find that boring overall, and rather depressing sometimes.

Arrogant sorcerer and gothic pretty boy Foster makes painstaking preparations and horrific sacrifices in order to bring the Devil into this world, so that he may ask Satan himself if he can serve under him as a demon. The only thing is, the Prince of Darkness is more like a Princess of Darkness, and she’s not willing to turn Foster into a demon unless he can prove himself to her.

Eager to please his Dark Mistress and prove his loyalty, Foster undergoes a gender transformation, and, if the newly transformed sorceress can prove herself, Satan just might turn her into a full-fledged demon. Little does Foster know that when you make a deal with the Devil you’ve got to read the fine print, because Satan has quite the role in mind for her new-found demon-to-be.

Foster’s goal has been to get the Devil’s attention. He finally does, and she’s unimpressed with him. Still, she could use him somewhere, for some purpose. Foster then discovers that what he wanted isn’t what she gets.

Overall the story is rather dark, the characters are, for the most part, unlikeable in their thoughts, actions and words. Foster in particular is really very unlikeable and that’s a problem when that is the main character. There’s not a single redeeming quality about him, nor really does his character develop into something more than what he starts with.

The devil’s first appearance is a quick transformation scene, one that passed far too quickly. The same can be said for Foster’s own. There’s not a lot of detail, there’s a rush to get to the sex and that leaves a lot to be desired overall.

There’s a real lack of character development, there’s little time spent in telling more about the Devil, to give her more character than being evil and manipulative. Foster is singularly focused on one purpose throughout the work. When his “rewards” is given, the shift into that new form, being a succubus, is done in an instant, there’s a complete change in her personality, and she’s evil… just because.

I couldn’t really get into the story, I didn’t really care about any of the characters. The erotica didn’t have much heat, the theme was overall dark and to a point depressing. Even the twist, when it came, didn’t do much save stress how much Foster’s transformation changed her, making her a pawn. But then she’d always been one. She just never realized it.

I didn’t like any of the characters overall, they all being stereotypical in their actions, words and thoughts. The transformation was well done, but then the story devolved into sex scenes, some dark turns and a feeling that, in the end, nothing came from it. Perhaps it is what the characters wanted from the beginning, at least one did, and I expect they all did in the end.