A review of Turned into a Succubus: Gender Transformed by the Devil Herself by Lily Fey

A Review of Demon Futa takes Revenge by Jocelyn Saragona 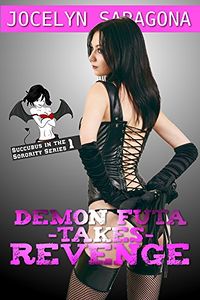 A short time ago an author released a series of three works about futa succubi. Each of these followed one specific character, then came to a close leaving the door open towards further stories about them. While I haven’t reviewed those works, but will shortly, one of the characters, named Sharis, is the centre of a new series of books about her.

Today then, I’ll be reviewing the opening work in that series on the Tale.

Sharis is a futanari succubus on her way to her sorority’s first big party. Her futa nature is no secret to Lucy, who won’t keep her hands -or lips- to herself during the car ride. That’s only the start of Lucy’s impulsive exhibitionism. She shags a guy before the entire party. It excites Sharis and she wishes she could be that bold.

But Lucy is whipped, disciplined, and humiliated when upper-class members disapprove. Worse, someone recorded her little show and is blackmailing the entire sorority. When seduction isn’t enough to catch a blackmailer, the sorority turns to Sharis and her supernatural abilities. She makes a dubious deal with another, more powerful, hell-born vixen to save the sorority’s reputation.

Sharis isn’t your typical succubus. She isn’t from hell, she made herself what she is with a spell she shouldn’t have toyed with. But in spite of that, she’s found a home and she’s living the life she’s been dealt well enough. But when called to help a sister, she needs to call in the help of a real succubus. That’s when she has to deal with her heart and her duty. Neither is an easy choice, but then no choice ever is.

The single largest issue with this work is that it needs a serious editing in many ways. For example, at the beginning the sentence: “She leafed through the illuminated illustrations. ” No. That’s completely incorrect. There are a lot of instances of such mistakes appearing throughout the work and it really hurts what otherwise, as a story, has its moments.

As well, the dialogue is very stiff at times, it doesn’t sound like anything “in a normal conversational tone.” Beyond that, at times the narration loses its way, there are points where some details are skimmed over but most of all, there’s a real disjointed feeling to the story overall. It feels like the author was trying to find their way, didn’t quite manage it, but pressed on anyway.

The erotica ran hot and cold for me. I didn’t care for the attempts at BDSM, discipline and so on. It didn’t feel right, read right or, in the end, manage to get the story to move very far. I did like Sharis in some of her intimate moments, but again, there was a disconnection from what happened, who was involved. Sharis being pleasured in a car could have been very hot, but what comes out is little better than a hot flash. Really overall much of what Sharis gets involved in are hot flashes with little heat in them.

That is until Jacquette makes her appearance. While Sharis is the main character of the story, and a succubus, Jacquette is a far more interesting character overall. She’s more of a succubus, more seductive, more in tune with her powers and not afraid to use them to her advantage. There’s a neat little moment at the end of the work, beyond the climax, where Jacquette offers Sharis a boon and Sharis has to consider it. The idea of the series returning to that, the possibility for Sharis to be taught by Jacquette in fascinating to me. I hope that happens.

Jacquette is very much a more “evil” presence, she is very much a succubus, and glorifies in that. I liked her no-nonsense character, how she is very clear in what she wants and more. Where that takes Sharis in the future will be telling I think in many ways. The contrast between Jacquette’s evil and Sharis not accepting that she has to be so, to the point of pressing against Jacquette, was a wonderful scene.

The work needs a serious editing, the number of mistakes in word choice, grammar and most of all the difficulty in reading the narration, or being able to get through the dialogue without wincing is a problem. It shouldn’t be. There’s too much promise in Sharis and Jacquette for that to happen. I like them both as characters, but there’s so little development to be seen and that bothered me. There’s some hope, at least in how this work closed, that the next work will press Sharis as a character forwards and I dearly hope that happens. Along with at least one more editing pass.