A YouTube video game scene with a Succubus possession 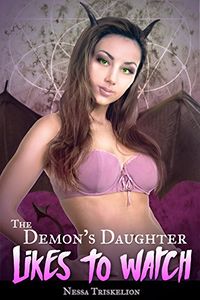 The Demon’s Daughter Likes to Watch by Nessa Triskelion

A short time ago I reviewed the first work in a new series about a succubus named Elodie and you can find that review here on the Tale. At the time I noted a series of questions and issues that bothered me about the work. I also mentioned what I had hoped might be the focus of any works that followed. Recently another work did appear and while there was some opportunity for more story to be told, and there was to a point, the story of Elodie herself seemed to go into a bit of a tail spin… literally.

Telling a story needs to be more than a narrative about what happens around a character. Even when that story has some heat in it, not doing something with that heat can be disappointing. It’s a shame when much of the story seems to be pieced together and the outcome winds up to be not much more than an interlude.

The second work in Elodie’s story is:

Elodie is a fledgling succubus just trying to make her way through college. When she and her best friend have the opportunity to watch a pair of girls make out in the showers, will she be able to resist trying out her powers on Stephanie? No. No she won’t. And the result will certainly be juicy…

Elodie has a series of issues, not the least of which is that she needs a job and quickly. Being dragged by her best friend to work out brings with it a little voyeurism, some fun and games and the possibility of something going right for her. But not all things are quite expected and family is, after all, family.

I had the feeling that this work was a little lost for the most part. There didn’t seem to be a real direction to the story at times for one. The other issue was that the erotica felt almost tacked onto the story as an afterthought. The heat simmered, trying to come to a boil, but never really got there. It teased and not much more than that. More so, the erotica didn’t really “show” very much, leaving much of what happened to the reader’s imagination. It was a little disappointing in that this work is about Elodie, she is a succubus, and she barely acts as one.

Part of that is Elodie’s character, her desire to not depend on the talents she has, which storywise is interesting to read. But that means the story falls back on what happens otherwise to her. Her day isn’t really under her control so much as she is dragged along by circumstance. Elodie tends to be rather whiny much of the time, but there are moments when the story takes a positive turn.

Some of this is her desires when she encounters someone, some is her past which is touched on more. Still more comes from the appearance of a family relation. But in all of these moments it happens so fast that little time is spent on developing things than it is in a rush to move onto the next moment in the story. Much like the first work in the series, this work is too short, which leaves a lot of story and development to the side.

I really do like Elodie as a character. I’d like to know more about her mother, which doesn’t happen, and as for Lala, Elodie’s aunt that appears for a fleeting moment there’s a certain familiarly about her, one that suggests that this universe is connected with another series in some way. Perhaps, as in that series, there will be something told about Lala herself along with Elodie.

While there are no obvious editing issues, the story is short, the heat of the erotica is lacking. Character development gets a toehold, enough to start to tell something about Elodie herself, but only skims the surface. The main thing, as a whole, is the work is far too short and that hurt the heat, the story itself and the characters.

The heat that exists in this work doesn’t actually settle around Elodie. It holds itself to a pair of minor characters that appear, then vanish moments later. Even when Elodie’s powers come to the fore and there is some heat, that felt muted and inconsequential. That said, the telling of more about Elodie, her life, her family and those around her was what kept me in this story. But it wasn’t quite as strong as the first work in the series.

There will, obviously I think, another work in the series to come. Perhaps with that will also be some focus on building Elodie’s character, telling about her mother, who still is a mystery, and perhaps take Elodie from being something of a wall flower into something more.

I hope so, because there’s a lot about Elodie I like and would like to see more of. I hope that will be.