Succubi Image of the Week 455 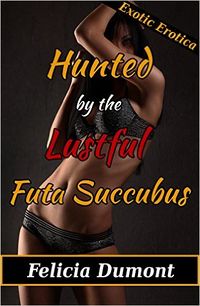 Hunted by the Lustful Futa Succubus by Felicia Dumont

I enjoy works that have history and background to their characters. I feel that makes them something more. There’s things to wonder about, consider as the work unfolds. Sometimes those hints involve other characters as well, and then I’d like to know what happened then. It doesn’t happen often, which leaves a lot of questions behind, but that I can accept.

The issue comes when the story closes on a point where it’s obvious that something more needs to follow, that the two characters have something to figure out, and doesn’t explore that. A cliffhanger on work with nothing to follow it bothers me.

Gwen has been on the run for a long time. Better to be safe than sorry, when you’re a vampire. But it seems that Gwen’s sexual passions have garnered the attention of a lustful succubus, who has sought out the vampire across the world, using her own sexual aura to find her. When the succubi finally catches Gwen, she has more than one surprise in store for the lonely vampire.

Gwen is a vampire, a very experienced one at that. Playing it safe has kept her alive so far, but when an encounter leaves her rattled she finds that she has been hunted for centuries by a succubus that wants her. The question is, what exactly does that mean for them both?

The work tells a lot about Gwen, some of her past, her thoughts about her life as a vampire. The interesting part of that is all of the history she has, what she’s done and where she’s been. There’s a hint of her being, at least a little, worried about her life, trying to protect herself as much as she can. When she meets with a friend and a threat seems to appear, that’s where the story takes the turn towards Miranda, the succubus of the story.

Miranda is a futa succubus, but she’s different than most characters like her. She’s intent on Gwen, and the why of that, what it means, how it unfolds is what I wanted to see more of. The problem is that, compared to Gwen, really very little is told about Miranda. Her history is murky, save that she’s been on the Earth as long as Gwen has. Miranda’s been searching for Gwen, tells of some of the places they have been.

And that’s the problem, It’s a bit of name dropping really, there’s no detail, no expansion on that point. It’s a hint as to Miranda’s need to find Gwen, but not told. That plot, which I wanted to know of, is just put out in the work as a teaser, then it left behind as the work moves towards the erotica.

That erotica is a hot flash, actually a fairly good one, with a little bit of succubus and vampiric powers mixed in with the futa theme. It is short however, the moment passes very quickly and then the story concludes very rapidly. The conclusion leaves the promise of something more to be told, but never gets there. It’s a shame really because the erotica turns the work in what would be an interesting direction, to tell a larger story about both characters, but doesn’t.

Overall, the story could have continued in that vein, told that story, opened both characters up, told more about Miranda’s past as well. There are a number of lost opportunities here, and I wish the author had delved into them.

The characters are interesting, the plot is a little thin overall. The erotica could have had more heart, perhaps moving into a second scene between Miranda and Gwen that was not quite so rapid and forced overall. There’s a lot that could have been done, but it wasn’t.

I liked Gwen, she was interesting. I needed more about Miranda by far. Her past isn’t explored, only teased at, and in doing so a lot of opportunity was lost to tell a larger story. I’ve said it many times that erotica without story is disappointing. This work just about avoided that, and I really wish more time had been spent on telling the past encounters between Gwen and Miranda. There’s another story in there, there’s a story to follow this one, but it never appeared.