A Review of His Darkest Desires: Transforming Him into a Fertile Succubus by Lily Fey

A Review of Seductress Seduced by Kira Barker 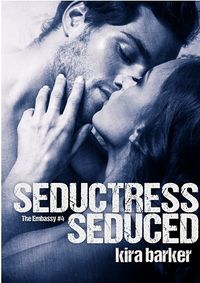 Quite some time ago there was a series called The Embassy in which each work in the series told the story of one supernatural being or another. In one of these, of course, the main character turns out to be a succubus. While that garnered my interest, what kept me was something about her that tugged at me. A seeming feeling that she didn’t really care much, that she’d seen too much and for too long. But beyond that, she’d found that some things she could do, she never wanted to again. That was something I wanted to see unfold.

To be a succubus means, much of the time, you know exactly what the other person wants. What happens when you aren’t really sure if you do know? Moreover, what happens when the control you’ve placed on yourself is stretched to the limit and beyond?

Welcome to The Embassy…

The Embassy is a matchmaking service catering to supernatural clients, and those who would love to satisfy their curiosity. Be it vampires, werewolves, demons, or humans, everyone finds the perfect partner to make their fantasies come true!

When your entire life revolves around sex, it’s easy to forget how much fun it can be–at least that is how succubus Viveca has been feeling for quite some time. But then she is approached to take care of Garrett, hotshot new insatiable lover for the female clients of the Embassy. He’s been trying to get on Viveca’s radar for quite some time, and he is very open for all kinds of exploration. After all, it takes a real man to even attempt to satisfy a sex goddess.

Viveca has seen a lot in 2,000 years of being a succubus. She’s done everything, seen it all. She’s become almost bland resigned to sex and for a succubus, that’s not a good thing to happen. A call to take care of a new client is intriguing, bothersome, irritating and that’s just Garett’s personality. Taking control and using him as she wishes, Viveca’s self control is pressed and she faces something she never wanted to again. The taking of another soul.

The most interesting part of this work for me was delving into Viveca’s personality as the story unfolds. To see things from her perspective and listen to her thoughts. She’s dominant, every bit the seductress and succubus she appears to be. Honestly Viveca’s character I adored because her thoughts allowed a glimpse into her own soul. To explore her own wants and needs, but also her fears and more. She’s a very complex character and through the story facets of her are brought out then shuffled around to deal with what comes next.

If Viveca is slightly mysterious, then Garrett is painfully self-centred at the beginning of the story and I really didn’t care for him very much. Even as the heat came into play, he submitting to Viveca and what comes from that, as a character I just didn’t care for him. It’s one thing to be self-confident, it’s another thing completely to act like an ass until the whip is literally cracked on your rear.

The mystery of Garett, when it is revealed, honestly wasn’t that surprising. There were a lot of hits about what he was, what he could mean to Viveca and what that might result in for both of them. There’s a lot of dancing around his truth, trying to keep it under wraps as long as possible. The point in the story when it comes out feels a little odd, mostly I think because of what Viveca went through in the moment before.

As much as this story comes to a sense of closure, I wanted more out of the ending than the very quick one that came here. I would have liked more actual dialogue between Viveca and Garrett for one, and I wish there would have been a little more of the “what comes next” than the “promise of something will happen, but you’ll have to imagine what that is.”

It’s a shame the series never returned to either of Viveca or Garrett, save for in passing. This work tells the story of the beginning, but it leaves the middle and beyond left to the reader’s imagination. It would have been nice to see a part two, but that never happened. The balance of the series was as well written as this work is, but as there isn’t any appearance of succubi or incubi, they didn’t interest me as much as this one did.