Succubi Image of the Week 454

A Review of That’s The Spirit by Belinda Burke

A Review of The Cult of E by Ivona Dikson 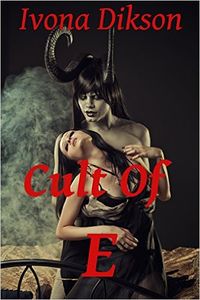 The Cult of E by Ivona Dikson

There are some works which just are missing something. Sometimes that is plot, sometimes that is heat. Many times the problem is a lack of direction, of purpose, of making the story speak. There can be a focus on odd erotica, of actions or words spoken that give me pause and wonder… why?

Character names do matter. They invoke mystery, passion or a need to know more. Leaving the mystery to one of what happened rather than why, doesn’t make for a good read. It makes for the start of confusion. Mixing a story that seems to have little purpose other than the sex makes things odder. Leaving the reader wondering what and why things happened is more disappointing still.

E is a one of a kind Demon, part incubus, part succubus and part vampire. He has his own group that live with him in his home along with his acolyte Christopher. Within the group E can satisfy any and every desire a sex demon could have, until Emily arrives. Emily is different changing Emily has unforeseen consequences. Amber, the member of E’s group who found Emily has wanted E to make her an immortal acolyte for over a year, but E has refused. With the sudden changing of Emily, anything could happen as Amber’s jealousy starts to show the night of the ritual.

E needs Emily. S/he needs her in every possible way and more. Drawing her close the need grows and those around him/her fall to their desires. But nothing is perfect, least of all E.

The work needs quite a lot of editing overall. It reads oddly at times, there are points at which there’s very little comprehension of what is going on exactly. The characters are very thinly written, and almost seem to be within the story for the sake of having a series of sex scenes unfold that don’t really have a lot of heat within them.

E, the main character, is never explored fully in this work. S/he is a mix of a succubus, an incubus, and a vampire. That in itself needs a little explanation and that is what comes in the story. Very little explanation. They have the ability to shift forms, be male or female, but that isn’t told in detail either. The entire meaning behind the character is told in literally a paragraph or two and nothing more.

There’s a little bit of mind control, but that too is skimmed over in the rush to get to a series of sex scenes that read oddly, occasionally make no sense, and at times push the boundaries. Personally I didn’t care for the violent aspects that happened in every scene, and as such there was next to no heat in the work. There’s blood, there’s some anger and quite a lot of pain at times. That might be appealing to some, but I couldn’t see it myself.

Just a lot of opportunities for story to be revealed and it wasn’t. What remains is the threads of what should have been something interesting but is left to stand on sex alone. It simply cannot. Erotica without a good story to support it and vice versa leads to disappointment.

There’s no substitute for plot and story. No amount of sex, no matter what kind or how it is written, can overcome not having one of some kind. There is a story somewhere in this work, but it never really comes out as it should, nor did the ending really feel like it mattered when it came to a close. There’s a good idea here in who E is, but that is only toyed with. Much like my interest overall in this work.