A Review of A Surprising Summons by Kaysee Renee Robichaud 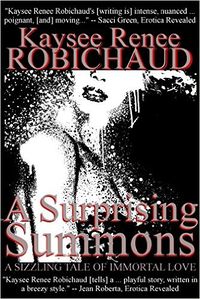 The transformation of a character is, at its core, a very complex thing to explore. Some resist change, some explore it and some cannot quite understand why things have changed for them. Beyond that, then the question becomes if their own nature matters or if they have a semblance of mercy within them when there wasn’t one before.

Sometimes the unexpected comes. Sometimes an experience opens a thought where there wasn’t one before. But then, as well, sometimes the universe has its way regardless of what we want things to be.

Loreline is immortal and can take whatever shape she wishes to fascinate her mortal victims. She is a succubus who has clawed her way into the mortal realms enough times to know what foolish mortals desire. When she encounters a sorcerer who is no fool, Loreline discovers that even she can still be surprised. How can an immortal demon who has never known real emotion cope with such strange desires?

Loreline is summoned to the mortal realm in what she thinks is the usual way. But the summoner isn’t what she expected and over time even an immortal and learn two lessons. One is of the heart and the other is the price of mercy in an unfeeling universe.

There are quite a number of threads that weave their way through this story. The question of time as seen from two perspectives. The concept of pleasure, from one that never has felt before. The longing of need and want tempered against one’s one self-preservation. The question of mortality, the human soul and what comes beyond. Mixed about all of this introspection there is lovely heat and passion from the main characters, reflective of each’s one understanding of what they, and the other, wishes.

Loreline herself isn’t seen in her true form, but her powers as a succubus, shape-changing, personality moulding, the ability to read minds and become what the other desires, work quite well. There’s a fair bit background about her, what she sees and experiences away from Konstantin, the one that has captured her thoughts.

Konstantin isn’t really explored as a character as much as I would have liked him to be. He’s present within the story, in Loreline’s thoughts, but the glimpses are snapshots and that’s a shame really. I’d like to have known what he was doing between, what he thought of her. Did he crave as much as she did? They are interesting things to think about, but never quite revealed save for the encounters as they come.

The ending is, all things considered, expected from the start of the work. But at the same time, there’s a moment, and it’s really telling about Loreline that shared her deeply. It’s a shame the story ended where it did, not being able to see what comes next, if there was something more than what Loreline explained, or offered.

The characters are interesting, the story is delightful in many ways. The heat is well done, Loreline isn’t quite the same by the end of the work, which I liked very much. But the ending took a lot of enjoyment out of the story for me.

The ending was a bit telegraphed through the story and when it came it was both expected and at the same time so deeply sad in many ways. It’s the ending, which cannot be overcome by either character, that broke the spell of the story for me. I admit, freely, I like happy endings. Perhaps this one hurt more than most for what I’ve seen this year. Melancholy is a difficult thing to live with and it seems that Loreline knows that well.