A Review of Kissing Darkness by Fionn Jameson

A Review of Izzy’s Fight by Nicole Clark 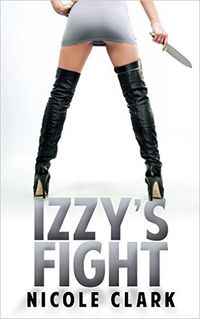 One of the more interesting concepts that appears from time to time is that of a succubus who is Lilith’s daughter. Sometimes that leads to a character who is made to be “evil” in every way possible, be over the top in being so. The more interesting type of character to me is one that isn’t like her mother, has her own needs, loves, and makes a choice.

That can lead to a conflict of course, the question is what that conflict leads to, what the result is, and what it could mean. Sometimes being evil for the sake of being so does not mean you are infallible. The needs of the heart, occasionally, can do anything.

Izzy’s always had her fair share of men. When you’re part succubus it means not only having fun but survival. When her latest fling turns from a quick fix to lingering problem intent on stalking her and fulfilling his mission of killing her the only thing she can do is fight. Fight for her life. Will she continue to breathe or will the one sent to kill her be victorious?

Izzy’s life isn’t all that bad really. She has a friend that she loves, a life that isn’t hard to deal with, and even though she is a succubus, she’s not at all like her mother. But things change, a stalker comes and with him the knowledge that her life is forfeit. Unless, of course, she decides that life is worth living, even if that means taking another’s life to do so.

The story is a mixture of mystery, learning about oneself, and trying to understand why things are as they are. It’s a unique story about a unique succubus that I really enjoyed. Izzy is thoughtful, concerned about others, and while her needs as a succubus do come and she cannot resist them, she’s quite sure about one thing. She’s better than her mother. It’s that underlying story, what the difference is between Izzy and Lilith that I thought was the core of this work and it connects to why things happen as they do in the story, and what Izzy has in her life.

There’s only a little touch of erotica in this work, only a quick ensnarement and one loving scene later in the work. But that’s not the point of the story. Really the point is the idea of family, what that means, and the choices that Izzy has to make, or rather is forced into making.

There is a moment that comes towards the end of the work that is shattering, and really could turn Izzy’s story in a number of directions. While that isn’t explored fully, it does lead towards a following work, but that never came. The question of the “stalker”, who he is, what he might need or want from Izzy now aren’t explored as he vanishes from the story at a critical point. Then comes the relationship that Izzy has with her best friend, which is sort of told, really needs to be more considering how close they are. But that doesn’t come as Izzy makes a choice which then leads to the conclusion.

It’s a bit disappointing overall in how the story ends, it’s not exactly a cliffhanger ending, but more of the story petering out and grinding to a halt. The work really should have ended before, the epilogue just didn’t work for me at all. It was missing… Izzy. It wasn’t her so much as a throwaway scene that didn’t seem to matter all that much.

The writing is quite good, I liked the characterizations overall. Lilith might have been a little too stereotypical, but considering the plot and how things unfolded, that shouldn’t be a surprise. More time spent on Izzy’s relationships would have been nice, more about Izzy herself, her past, which is only hinted at, would have been better too. The work is just a little too short for all of the hints and questions that are brought up but not explored.

Though this work was billed as being the first in a series, to the date of this review, no further works in the series have appeared. It’s a shame really because there are quite a number of unanswered questions that really need to be explored. What happened to Lilith, what that means to Izzy. Does that “stalker” return or not? What about Izzy’s closest friend? Did the events that Izzy had to overcome change her? Most of all, what does come of Izzy after the conclusion of this work?

So many questions never seemingly to be answered. It’s a pity because the promise in this work will never be brought to the fore.