A Review of Seducing the Succubus by Sabryna Nyx 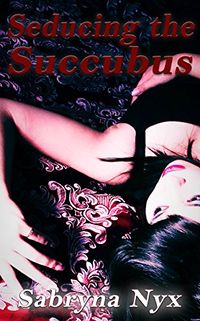 Seducing the Succubus by Sabryna Nyx

At times there are certain things which are good to know in a story. Knowing the main character’s name, for one, I find to be quite helpful in being emotionally involved in the story. A story that is driven by the characters is something I rather like as well. But sometimes it’s difficult to give the suspension of belief needed when events take a turn.

Submission is a very personal thing. It is not a question of taking that from someone than it is the giving to one that is worthy of being submitted to. Along the way, sometimes, the two meld into something that cannot help but be very messy.

A female witch decides to summon the Succubus Lilith for her ultimate sexual fantasies. There is just one problem; the Succubus is only interested in mortal men. The Succubus eventually succumbs to the witch’s summoning spell, but can a mortal witch handle Lilith’s power?

A witch takes the risk in summoning the Queen herself, Lilith. She seeks Lilith’s power, her touch, her seductive nature. To fall into the clutches of a succubus and be enthralled by her. But there is a price to be paid, a pound of flesh, and the soul that cries out in need.

The main character of this work is never named, simply calling herself a witch and being referred to as such by Lilith when she appears. There’s a story behind the main character that’s skimmed over in the rush to the summoning, which was disappointing as so many of her thoughts offer hints of things that are never paid off in the story.

While much of the work revolves around the witch being taken, controlled, dominated by Lilith, there’s a little bit of a false start at the beginning of the work that felt a bit like filler in a way. Once past that, and into Lilith actually making herself known, the story moves directly into the erotica which has a very clear fantasy BDSM story at the core. Along with that comes the question of submission and domination, a little bit of Lilith using her powers, and body as a succubus in various ways, to draw the witch into her orbit and spirit her deeper into her clutches.

The erotica which is told in the seduction I enjoyed, Lilith was quite delicious in being seductive. However, when the more violent aspects came, such as biting, blood, some whipping and other punishments, i found the heat in the story faded rapidly away. There didn’t seem to be the same focus on telling than there was in titillation. The heat fell away as the biting, scratching and various means of pain being inflected by Lilith on her prey were told.

It’s a shame because outside of those odd moments where things were told in a rush, not expanded on, there was something interesting there that didn’t come out. Some of the events made some sense, but there were far more that gave me pause and wondered just how what happened would actually work.

One of the larger issues of this work is the flat dialogue. There’s no passion in the words, they read like someone was reading from a script and not putting emotion into it. Really that’s what’s missing the most from the story, the passion of the characters. The witch toying with herself has heat, but her words and thoughts dampen them. Lilith has power, but her words don’t seem to reflect that power fully.

There’s a disconnect between the moment of dominance and the words spoken. They are too calm, too rote, too matter of fact. The replies of submission read oddly, needing passion and to evoke the need within the character to submit fully.

The description of events is quite good, the author paints a vivid picture, but the dialogue, again, is lacking and the narration at times sounds almost bored. Once past the encounter, the story takes a turn into something far more interesting, more alive than the encounter with Lilith in many ways. There’s a certain threatening nature to events, a hint there is more to come and it’s very promising from adding suspense and power to the story.

The work ends on a kind of cliffhanger which offers a very obvious hint that another work should follow to continue the encounter between Lilith and the witch. There’s a need to suspend one’s belief about some parts of the work, especially towards quite a lot of lactation with regards to the sexual encounters.