A Review of Succubus Training by Syn Root

A Review of Succubus by Kat Lizati 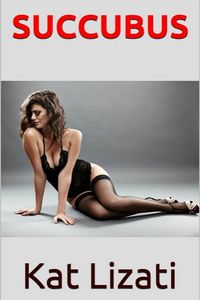 The stories about succubi that I truly enjoy are the ones that make me think about the characters, ponder ideas, thoughts and concepts, and in doing so offer something unexpected. There has to be something different, something that takes the stereotypical and ignores it completely. When a work can do that, go past what succubi are expected to be and make them something far more, that’s when I find amazement.

Becoming a succubus isn’t the hardest thing. The problem comes in dealing with being human, being a succubus, and all that pulls upon you every moment. The discovery of what you can do, not what you are, can be the most freeing thing of all. What gets in the way is what you know to be true and what you need to believe in. You start with believing in yourself.

Two years after her divorce, Diane Sizemore has finally decided to date again. Unfortunately, the devil is in the details, or in Diane’s case, on the internet. On her first date since high school, she discovers that the man she met on a dating site is actually no man at all. Coming face to face with Lucifer was a shock, but it was nothing compared to what came next. Announcing that her eldest son is destined for an eternity in Hell, the vile but handsome creature offers her an alternative: Work for him for a month and he will wipe her son’s soul clean.

Diane takes the deal. What else could she do with her son’s eternal soul on the line? Now the newest succubus working for the Prince of Darkness, she must seduce twenty men who may or may not be evil. Lucifer claims that she cannot turn a man evil… a succubus can only expose the evil that is already there.

When the Archangel Uriel confirms the devil’s claims, Diane goes ahead with the deal, but it soon becomes clear that Lucifer has another agenda that could affect all of humanity. Trying to balance being a mother, an accountant, and a seductress in the service of the Lord of the Flies, she must try to focus on the task at hand and believe that, in the end, God will secure Humanity’s future.

What Diane didn’t count on was the addictive nature of being a succubus. She spent her adult life in a largely sexless marriage, and the new and almost constant arousal caused by her new occupation begins to break down her inhibitions and her rather prudish upbringing. Still determined to end her term of service and get back to her own life, she must constantly fight to maintain her hold on her soul and her sanity as her assignments become more and more depraved and exciting.

Diane’s had the most odd date. She met Lucifer who put to her a simple proposition: Do something for me and I’ll make sure your son has a chance to stay out of Hell. Now Diane has to deal with being a succubus, her sex drive going through the roof, and her life changing more than she knows. Events spiral away until one assignment forces her to confront her demons… and angels. Diane’s been told she’s special, and she will have to be.

What i enjoyed the most about this work is the mixture of theology that comes out as the story progresses. There are some points which, for me, strike close to home and I find to be very close to my own. There’s a point at which a simple statement is made by Diane: “I work for Him.” I think that’s a lovely expression of how I happen to see succubi and in saying that, Diane became that much more appealing to me.

Diane never is seen with horns or a tail, or anything like that. However, her changes, to her true form, I loved dearly. I especially thought the “clothing choice” of the succubi was perfect, colour, look and all. There’s some well written transformation scenes when Diane’s form is changed before she encounters someone, but there’s more than that. The author took a bit of a risk in telling of Diane being blind at one point and that telling, the feeling and textures of that encounter without the use of sight was one of the most captivating moments in the work.

Beyond this, how Diane slips into her new form is well told, there’s just this wonderful confusing, exploration and then capturing of her new form which flows with no stumbling or oddities. That then brings me to the erotica in the work. It is far too easy for stories about succubi to go over the top, and impossibly so. That didn’t happen here. The scenes feel real, there’s nothing stupid or odd about them. They have heat, there is emotion, and even when the erotica is Diane within herself and not with others, that heat and emotional connection is strikingly good.

Lil, a secondary character, is just as wonderful as Diane herself in many ways. She’s a bit more physically a “demoness” but there’s a sense of wonder and joy in her. The relationship that comes through the story I wish had been developed more, and dearly so. Her wit, expressions, and sheer enjoyment of the moment was delightful.

The majority of the work tells of Diane accepting her role, how things unfold and then comes an event that turns the story towards being quite serious in tone. There’s a bit of heavy-handedness at two points that I cringed over. Making a point, pushing a particular view of the world is fine and I understand why that happened, but it took some of the wind out of the sails of the work and it didn’t recover well beyond that.

That said, when the truth comes out and Diane goes in search of answers and how to make things right, the beings she meets are so amazing, so different, so special it’s a shame that the story didn’t spend more time with them than it did. At several points Diane is told she is “special” and I wish that had been explored or explained better. It’s a point that the work doesn’t delve into far enough and I wish it had.

The ending is, compared with the rest of the work, a bit sad and disappointing. There’s a suggestion of what it to come, but it is fleeting and not developed. Diane’s path going forward is set out, there’s an idea what comes next, but in the last lines of the work something was lost, something that was in the story, in Diane and one specific character, but it wasn’t taken to a real conclusion, which left me wanting.

Well written, amazing characters, a story that held me from beginning to end. A smattering of minor editing mistakes but nothing terribly so. An ending that needed to be a little more than it was if only for the sake of something resembling closure would have made this so much better.

The ending was disappointing considering all the story had to that point. Richly told, amazing characters and the erotica wasn’t silly or told poorly. All in all an amazing read that I recommend highly in spite of the ending and, at times, when the story became a little bit over the top in how some ideas where presented to the reader.