A Review of A Ghost of a Chance by Minnette Meador

The start of a costume perhaps? It might be…

A Review of Death Throes by Michael Stuer 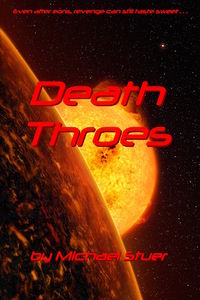 The thing about some stories is that they use a framework, an idea, which can be very familiar. Certain words and phrases remind the reader of such things as Dungeons and Dragons for example. That’s not a bad thing, actually it helps to speed up the understanding of what’s going on, the characters and the setting.

In the same way, a certain theme, or kind of character, usually suggests, or paints a mental picture, for the reader to enjoy. But even the best of these needs a story that’s a bit more than just a succubus and her thrall pleasuring her. That twist is what makes a story something more.

A succubus entreats one of her thralls to witness an event that she has been waiting many years too see happen . . . while enjoying some sexual titilation at the same time.

Gorflkk tells of his pleasuring of his Mistress, L’tirashin, her demands upon him and something that fascinates her. Her demand, to provide her pleasure exactly is a challenge for a creature such as he. The larger question, one that he doesn’t understand, is what has captured L’tirashin’s attention and what it all means.

The work focuses, for the most part, on Gorflkk, his thoughts and actions to pleasure his Mistress L’tirashin who is the succubus of the work. As such, the story mainly tells that story, how he pleases here, her reactions to him. There’s a clear D/s relationship, L’tirashin being in control and it’s interesting because the story seems to say they have been together for some time.

L’tirashin’s story is told in passing, rather fleetingly, as her attention is focused upon a major event in the universe that she needs to see unfold. Connected to that is her command that she is brought to orgasm at the exact moment the event occurs. Outside that point, L’tirashin is, for the most part, a mystery as her thoughts are mainly of what she sees. For her thrall, he tries to understand what’s going on, but at the same time, L’tirashin’s commands drive him onwards as not following her command would be a very bad thing.

Still, when the story came to a close, the concluding pages told more about L’tirashin and her thrall than the entire work before. More so, the ending offered a tantalizing glimpse of L’tirashin’s personality, her commanding presence. The story ends with her having a purpose, a drive, but we don’t get to see what that involves, only a little hint of that.

I would have liked the story to continue into the hunt for L’tirashin, what happens, who she encounters. That to me would be a very interesting story because even with the hints of a Dungeons and Dragons theme for the world, setting and characters, there’s something more. There’s a purpose to L’tirashin and that didn’t quite get the attention I think it deserved.

The erotica was a little bit silly at times, Gorflkk’s dialogue was odd, but that was a reflection of what he is, and how his find speaks, so it works in that way. L’tirashin needed to be more in the story than she was. Not that her presence was thin, but rather her need to orgasm seemed to overcome all else. I think there’s more to her character than that, the ending seems to suggest it. Having her be more devious and “evil” might be what’s missing here.

The work ends just at the point where the story moves from just being about the erotica with a smattering of story into a story about a succubus on the hunt. The latter interested me more because that would have, I think, told more about L’tirashin than what her thrall tells of her. L’tirashin is supposed to be very powerful, a warrior-queen of succubi in a way. That would be interesting to see be told.