A Review of How to Kill an Incubus by Kimber Lee

A Review of Seduced by the Sex Demon! 2 by Veronica Sloan 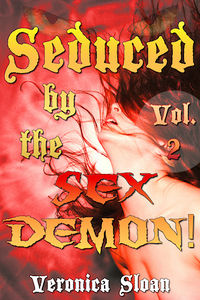 Seduced by the Sex Demon! 2 by Veronica Sloan

A few weeks ago I reviewed the first work in a series by Veronica Sloan. You can find my first review of that work here on the Tale. In that review I noted that I didn’t really see much in the story save tor it being mainly focused on porn-like sex scenes and the occasional shadow of mind control and a little bit of teenage horror film shock now and again.

Jeff isn’t Jeff anymore. A demon’s taken over his life and is doing anything he wants to. Along the way, among all of the wreckage left in his wake, Tanya sees that something’s very wrong. There might be a way to stop this, but the price might be more than Tanya ever expected.

Much like the first work in the series, there’s not really a lot of plot outside of the incubus having his way and causing as much sex to happen between characters as possible. There’s little in the way of developing the characters, there’s a fleeting glimpse of a larger, more interesting story, but it never comes out well.

That said, when Tanya, eventually, confronts the incubus, there is a story, she is a strong character and there is some kind of point to the story. There’s some explanation, Tanya needs to make a choice and it’s not an easy one to make. That all in itself could have done a lot for the story, but the incubus keeps gloating and that takes much of the drama out of things.

The conclusion of the series was, for me, a bit of a let down, it wasn’t unexpected. I found myself wondering if there could have been a better ending than what came. Personally I can think of a better one which offers a way for the series to continue. Not so much in a possession themed work, but a transformational one.