It’s Good to be the King by James

A Review of Deep Woods by Natalie Severine and Eric Severine

A Review of the Bloody Anastasia series by Anna Voo 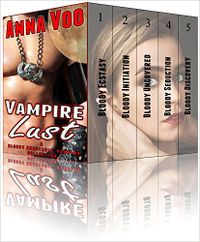 A review of a series of works in which the main character is, at least, a half-succubus, but in spite of her being so, there’s not a lot of focus on what that means. Most of that comes from the theme of the works, which are about vampires, and being so there’s actually very little succubus-like in the main character, save for how much sex she has in the series.

The thing about discovering that one is a succubus is that one should learn something about themselves. If that discovery takes up a single chapter in a series, then the series really isn’t so much about them being a succubus as it is about how much sex she desires as one.

For Anastasia Dames, love and lust is a part of her everyday life. As an escort, she caters to the twisted desires of the wealthy, rich, and powerful. But when one of her clients requests the option to taste her, to drink her blood, Anastasia finds herself tempted into a whole new type of forbidden romance!

Anastasia is a call girl who’s clients are rich, powerful, and, occasionally, a vampire as well. Falling into their world she discovers something surprising about herself, and something about those around her as well.

The series mainly has a focus on vampires and vampire erotica with some minor plot arcs appearing here and there as the series progresses. There’s more time spent on the erotica than character development as a whole, and being so it tends to push a lot of opportunities for exploring Anastasia herself to the side very often.

Anastasia discovers at one point in the series she is a succubus and then that entire plot arc vanishes into nothing as the rush towards more erotica comes and Anastasia with it. There is one other character that appears who is called a succubus, at least partly, but they are male, and so that bothered me as well. However, in that part of the series, when they are together, there is some interesting moments, some explanation about how things work, and that I did like.

The problem is that happens in the fourth and fifth works of the series and only fleetingly so. To that point really no explanation is given about Anastasia and why she can do the things she can, or why so many are smitten with her. I felt like this was a lost plot thread, or something that was dropped in at the last moment to explain things as simply as possible.

The erotica comes with a lot of vampire feeding and blood, which didn’t do anything for me. There is very little actual moments of Anastasia being a succubus, really the only moment she really used her powers the most was against the other “part-succubus” she encountered and even that wasn’t so much heat as it was a question of who would have the upper hand in things.

I would have liked more discovery about Anastasia being a succubus, more time spent actually learning about what she can do. Being the focus of the series, it makes some sense to have her character develop and change over time, but that didn’t really happen. Sex alone isn’t a story. It can be the heat or the match to start the heat, but it cannot burn alone.

For the series as a whole, I’ll give it two pitchforks out of five.

Lots of vampires, lots of sex, there’s even some plot and character development. There just is far too little succubi in the work overall, and even when Anastasia learns what she is, that plot really doesn’t go anywhere which was disappointing.