A Review of Seduction From Hell by Kevin Landrum

A Review of Lilitu by Craig McGray 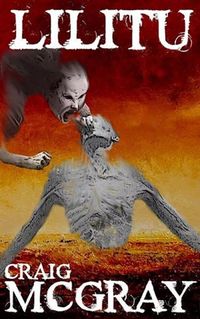 Taking a slightly different tack to the succubus myth, adding a layer to it can make for something to think about when the story is done. But then comes the darkness in the words and in the end, sometimes the darkness is all that remains.

A dying man’s last wishes are for the very thing that has delivered him to an early grave. In Lilitu, a seductive temptress returns to her lover’s bedside, but this time, she hasn’t come alone.

The past of a man catches up with him as he waits for her to take what she wishes to have. Along the way he remembers every moment, needing more. But when she returns to him, there’s no such thing as a happy ending for it never does.

The work is told from the perspective of the main character and as that is told there’s no escaping how sad his situation is, the pain and suffering that he goes through and his thoughts about how he came to be where he is. Mixed into that is a tiny bit of lukewarm erotica which really doesn’t do much overall because the darkness and sadness that appears on every page sucks the life out of the character and the story as well.

The succubus-like character, Lilitu, is quite a monster overall, having little in the way of sympathy, only really caring about her own need. The story builds on that point, the main character suffers, over and over again, and finally comes to the point where the next visit will be the last.

The story of that visit brings about the darkest moments of this work by far. There’s no light to be found, no hope, nothing positive taken from the ending and being so I just found myself disappointed in how things transpired.

This is a work of horror, and personally I have problems with horror that leaves me cold. This work did so. I think it might have been more interesting to me if more was told about Lilitu herself. At least something more than the few words she speaks as otherwise there’s nothing to tell of her character, her wants and needs, other than what she does. She’s stereotypical in that and being so was a sad thing to see.

A very dark, very sad story overall and I found it difficult at times to make my way through the story. It is meant to be horror, and it is by far, the ending very much so. But the depths of sadness that are in each word took the life out of the story and doing so just made me sigh sadly when the story was done.