A Review of The Widowed Succubus by Brian McGee 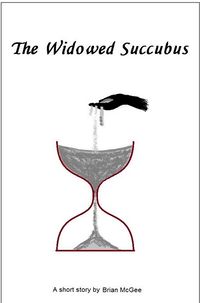 The Widowed Succubus by Brian McGee

The problem with short stories is that so much story is left behind untold. The details which flesh out things aren’t really there, there is no time to explain why things happened and, sometimes, how it all connects together.

Occasionally there isn’t even enough time to say if a character is what they seem to be. Questions are good to have in a story. But leaving out a revelation or two isn’t I think.

Reality is what you make of it. Unless of course your reality isn’t what you think it is. It is someone else’s domain.

If something supernatural and strange were happening around you, would you know? Would you want to?

Aaron tells of his past, his confusion, and a woman that isn’t all she appears to be. The path to madness is covered with mistakes, infatuation, lust and more. Sometimes not all of that is one’s own doing.

The work is told from Aaron’s perspective and being so, and considering his current state of affairs, it is a bit confused, disjointed and unclear at times. There’s not a lot of detail as the story is told as if Aaron was speaking to the reader of what happened to him. As a device to tell the story that works for the most part but there are some issues.

Aaron’s story reads very much like a summary of what has happened. There’s little detail to be found as much of his thoughts are about another character and his thoughts about her. There is very little dialogue to speak of, and as such the other characters in the work really never have a voice of their own to share. Everything comes from Aaron himself and as such there’s no real character development. Aaron’s path is complete from the beginning and so there’s nothing to carry him emotionally. Everything is told very matter of factly, leaving all else to the wayside.

The character that Aaron is focused on, Andrea, could possibly be a succubus, but that never really comes out in the story. There are some suggestions that she is, but really to claim she is a succubus is a difficult thing to do, even with the work’s title.

The story is tragic in many ways, both in action and tone. The events are told in such an emotionless way that one cannot be really sure about what happens, save for why Aaron is where he is. All else is conjecture really and interpretation of what he thought, felt, and reacted to otherwise.

I really didn’t enjoy the work very much because of the crushing sadness, loss, and mourning that was always lurking in each paragraph. This isn’t a work of erotica, it’s more a tragic story of one person trying to explain the unexplainable.

A difficult read in a lot of ways, one that could have been fleshed out more, told more about the other characters somehow.