A Review of Seductive Wasteland by Luke Huntley

A Review of Succubus Cheat Sheet by Samantha Nona 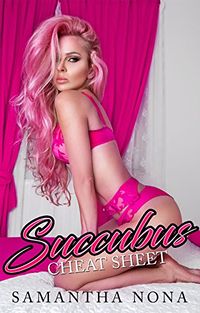 One of the story ideas that I have been mulling is the thought of a succubus with pink hair and horns that is… well… a bit of a bimbo overall. I think there’s a really interesting story to tell in that, it could be a lot of fun. An author released a story recently in which the main succubus character is, as a whole, perhaps not a total bimbo, but she is quite unique and more importantly, she isn’t a stereotypical evil succubus. That interested me.

Not all succubi are perfect. Not all succubi know the right spell, the right thing to say. Learning to be the best succubi one can be is a story about who each of them are. Some aren’t evil, they don’t particularly like being so. Sometimes the most powerful of the succubi are the ones that realize there’s more to their lives than being evil. There’s being smart in their own way… Even if that comes with a few missteps along the way.

Reina is at the end of her rope as her roommate Karen won’t stop arguing with her boyfriend. She prays for anything that might help the couple make up, but she certainly never would have expected a pink-haired succubus to be the answer.

Discordelia, better known as Dizzy to all of the succubi around her, has a problem. She’s not quite like the other succubi in a lot of ways, not the least of which is that she’s somewhat of a bimbo overall. Still, pink haired and all, Dizzy needs to pass a test and she knows she won’t be able to without some help. The test is harder than she expected and she’s going to need that help. But a cheat sheet might not be enough to get Dizzy out of the fix she’s in.

The story is summarized to be about Dizzy, but really there’s quite some time at the beginning of the story before Dizzy makes an appearance. The character that draws readers into the story has her own wants and needs, one of them being a rather strong mind control fetish which actually made me smile in how that was played into the overall story. This character pokes into the story at times in a voyeuristic manner which, at least for me, runs hot and cold. She’s on the edges of the story, acts as a catalyst for Dizzy’s appearance, but doesn’t really become part of the story, occasionally she’s a distraction, getting in the way of the storytelling.

Dizzy herself isn’t at all a stereotypical succubus and I enjoyed her personality, her thoughts and her struggles to deal with her flaws and those she encounters around her. Not every succubus is evil, not every succubus needs to be. Dizzy isn’t not by any means, really evil. She’s a bit clumsy, a little unsure and yes, she’s still using training wheels as a succubus, but there’s an adorable aspect to her that I liked in the story.

The thing is, overall, the story is less about Dizzy herself than it is about what Dizzy’s actions do. Dizzy tries to pass her test, we see her thoughts, her worries and at times panicking, but I didn’t feel like there was a lot of character development in her. She hasn’t changed much by the end of the work and I found that disappointing. I wanted to see her have some more belief in herself, to perhaps see something better for her future. But again the story didn’t really hold onto the focus it had on her, drifting to the couple that Dizzy is confronted with for her test.

There’s some moments of heat in that, the aspects of mind control in the work are well told, there’s a bit of a change in the couple, which worked well as it developed their characters and relationships overall. The heat in in the mind control and fantasy being played out between them, and that by itself works as a story on its own. But it doesn’t really push Dizzy’s story other than to tell of her test, how it goes and her grading as it unfolds.

There are quite a number of succubi other than Dizzy herself and in many ways they are somewhat stereotypical in how they act. I accept that Dizzy is looked down on, I understand that she’s not seen as being much of a succubi to those that are “better” than her. But they aren’t not really, and it takes some time before the reasons for that comes out. It’s actually rather sad in what that reason is and how someone that means so much to Dizzy doesn’t think that much of her, especially her hair.

There’s s bit of mind control used on Dizzy at one point and it didn’t quite work for me. The attitude of the succubus that toyed with Dizzy struck me as being counter to what she did for Dizzy. I think there’s a larger story in that, but it doesn’t develop. In the same way, the succubus teacher that administers Dizzy’s test reads odd. There’s a lot unspoken again about her and Dizzy and it’s a story left aside for the sake of what happens in the test for Dizzy and the humans she encounters.

This then brings me to the title of this work. The cheat sheet is at the core of the story, it leads Dizzy on her adventure and takes all of those around her upon it as well. It’s an interesting idea, one that I think worked well. However, the ending of the work left me a little cold. The comment made by the character which begins the story at the end made me wince a bit. It might work, it might make the character’s dreams come true. Should the author continue this work into a series about this, I really hope it won’t be as easy as the character thinks it will.

Overall I loved Dizzy as a succubus, I thought the mind control aspects were very hot and were told well. I was a bit disappointed in the slightly stereotypical aspects of the minor succubi characters, a bit sad that not more was told about Dizzy’s past, her family, and those around her. But this wasn’t the point of the work, it was really to use some succubus mind control on some unsuspecting humans and see what happens. The story is very good on that aspect, but I think it could have been more.

I really would like to know more about Dizzy, her mother, and her world. I like the idea of a pink haired succubus who isn’t stereotypically evil. I like the idea of her being a little bimboish in nature and stumbling along the way. Where I have a little problem is how the author tries to mix in what can only be described as an “interested observer” for the sake of the ending. I don’t think that needed to happen, I don’t believe that the ending really leads into what that character hopes for.

If there is a follow on to this story, I’d dearly like to see Dizzy become what all those around her think she cannot. I’d like her to be, in many ways, like the Succubi of the Realm. I think she is on the path, she just needs to be herself.

Perhaps that’s the story to be told?