A Review of Incubus Summoned by Roman Steele 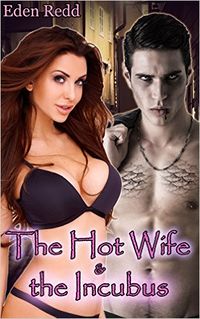 The Hot Wife and the Incubus by Eden Redd

What becomes more of an issue is when she writes a story, has a main character that really is interesting and offers something to think about, then reveals on the very last page why that is and doesn’t take that concept further. Erotica isn’t erotica without the characters, the story, and some depth to hold my interest, never mind the editing.

Mary and David are a married couple and living the good life. Mary loves how David takes to her demands in and out of bed. For Mary, everything is bliss until David starts to become distant.

The stunning wife begins to worry that she have been too demanding and may be pushing her husband away. When she suspects David of cheating, her blissful life begins to unravel.

The wife confronts her husband with her fears and is shocked at what David has to tell her. He has been exploring the dark side of the city and propositions Mary with a kink she never thought they would explore together.

The couple visit the underbelly of the city to find a demon that will partake in their new and kinky journey. But can the wife and husband endure the lustful desires of the demonic incubus?

Will the demon take Mary for his own? Will David stand by as his wife is seduced by Incubus? Will Mary discover her own dark secrets about her hungry desires?

At the start there’s a fair bit of background and a little bit of character development that I thought was interesting, but rather than focus in that, the story moves quickly into a short scene of Mary self-pleasuring herself, then onto what amounts to a side trip into her thoughts and day. Then comes an encounter with her husband. By this time almost half the work has gone by and overall nothing really happens save for Mary thinking about sex almost all of the time.

From the first page there was something about Mary being oversexed that, at least for me, made it obvious who and what she is. Given that there is an incubus in this work, I’ll leave the answer open, much as the author did. But if my theory is correct, then the author left an interesting plot to develop to the side, never explored it, and just off-handedly mentioned it on the final page. That felt like a afterthought and it shouldn’t be.

The dialogue at times sounds odd, the work needs another editing pass, and the erotica really could be a lot less porn-like and more erotica by far. The ending leads to an obvious work to follow, but I doubt that will ever happen. It’s a shame because after all of the delay in this work to get to the point, it left a lot of story behind never told.