Succubi Image of the Week 448

A Review of Incubus Summoned by Roman Steele 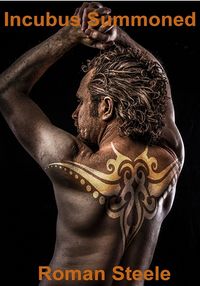 A review of a work that is, quite sadly really, no longer available. I will admit that I take some time to get to all of the books on my reading list, but I do eventually. This particular work reads very much like it was meant to be the opening for a series, though that wasn’t clear if it was. But the world building is really excellent here.

The needs of the summoner matter, but so do those of the summoned. A deal struck sometimes comes with strings, or flaws. The danger comes in what happens when the summoner becomes the one who is enslaved.

Shax is a hot as hell demon aching for release.

He longs to be summoned, after all the land of the living offers the pleasures of the flesh. When Jason, a cute young man with an interest in the occult performs a ritual to summon an Incubus, Shax heeds the call. Jason is under the assumption that he is summoning a love slave to keep all to himself, but he’s in for a surprise! It’s not long before the lusty demon shows Jason what true pleasure is, and that if you want to play with magic, follow the rules or suffer the consequences.

Shax tells of his world and the summoning that returns him to Earth once more. A mistake made means that he controls Jason, but that well brings what they both desire most of all.

The story is told from Shax’s perspective which brings with it a very dominate character. He is an incubus, there’s no question of that, but his focus seemed to be more on males than females. This then drives the plot towards Jason, his summoner, who forgets a step and falls into Shax’s clutches.

Much of the work is taken up by Shax telling about his world, the encounters there, and his aching need to come back to Earth and have “fun” with humans, who he adores. Along the way, he encounters other incubi and, more interestingly, he spends some time with Lilith. That moment in this work I found telling mainly for her power in the story, but more the heat that her appearance gave.

Once summoned and in the world again, I liked how Shax learned about the here and now he appeared in. It’s a short explanation, but really it’s one of the few times where an author didn’t simply hand wave how an incubus or succubus knew how things worked when they appeared.

The pulling of power between Shax and Jason was cute and while there is a D/s relationship that forms, it isn’t something that’s too far over the top or silly. Shax is in control, there’s no question, but his demands on Jason aren’t the sort of thing that would pull someone out of the story. Once controlled, the story moves from the telling to the erotica.

As the world building takes up better than half of the work, the erotica feels like it’s rushed, at times almost like an afterthought. There are a few minor mistakes in dialogue, but otherwise the writing is good. The world building, as I have noted, is the best thing of all here and there lies the problem.

The work is no longer available, there was no second work to follow this one and it appears there never will be. The author has vanished along with all of their works. There is more story here than what appears, it’s too bad Shax’s story will not be told further, Jason’s future will not be seen and the questions will remain unanswered.

The creation of the world that Shax exists in is what’s most interesting here. There’s quite a number of little stories hinted at, but never really told. The erotica has heat and it reads really well. It’s a good combination, but the latter half of the work seemed to be rushed. It’s a shame this work is no longer available for if there was a series to come from this, I think that would be quite telling.

But we’ll never know it seems.