A Review of Power Hope Futility Oblivion by Michael Stewart

At least there is an attempt at class in this costume

A Review of The Unleashing by Jasmine Wright 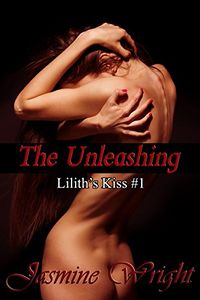 The Unleashing by Jasmine Wright

A review today of the first work in the Lilith’s Kiss series by Jasmine Wright, one in which I have some very mixed feelings about. One of the themes that appears quite regularly in works with succubi is transformation. A character finds a book, or some other item, and falls into their soul, and body, changing into something else.

Lizzy had plans for her Friday night, and they surely didn’t include working late at the public library. She would much rather be at her ex-best friend Sasha’s Halloween party, letting her know how much of a bitch she was for sleeping with Lizzy’s ex-boyfriend while they were still together.

But, thanks to a co-worker’s call in, the petite redhead is stuck sorting new arrivals in a small corner room on the facility’s third floor with no one to keep her company except Claire, an introverted coed from the local university. Things, however, take a turn for the demonic when Lizzy opens a strange, leather-bound tome, unleashing an ancient evil that engulfs her mind—and body.

Seized by a sudden uncontrollable arousal, Lizzy is forced to watch as she transforms into a hellish creature of unbridled lust, bursting from her clothing with otherworldly proportions. The new, lascivious beast that emerges has only one thing on her mind…

Lizzy is rather upset with her best friend and her ex-boyfriend. Planning to go to their Halloween party, she first needs to finish up at the library. A book discovered leads to a transformation for Lizzy. No longer the girl she was, Lizzy the succubus craves something more.

The first thing I’ll note is that the summary isn’t quite true to the story which appears here. As a whole it covers the first work and tells what Lizzy will likely do in the next. The majority of this work is taken up with Lizzy’s transformation, which is about two-thirds of the work. The remainder is telling of Lizzy’s background, recent events and her being at the library.

Setting aside my well known dislike for hooves, and yes, Lizzy gets them, the problem I had was trying to picture Lizzy’s new form in my mind. There is such a thing as going a little too far, having something change that pushes reality beyond anything reasonable and in this case that comes to, for the most part, Lizzy’s cleavage.

Double-H isn’t something reasonable. Yes her body changes, yes she’s made more… if not “demonic” then certainly taller. I can sort of see why the author pushed Lizzy’s body to the extremes that it takes in this work, but there are so many changes that it becomes rather monotonous. There is a bit of heat in her transformation, and I can see that and appreciate the author doing so, but… it’s just a little too far, a little too much.

There’s really very little in the way of plot in this work, being that it focuses upon Lizzy’s transformation. There’s a hint of Lilith, though that is fleeting, and what she wants is a bit murky overall. Lizzy’s character has a chance to form in the introduction but through the transformation all of that buildup gets tossed aside.

I think there’s a story here, something that might turn into being more than just a little series of hot flashes. But there needs to be more time spent on plot, on the characters, on telling the story more than just telling about transformations. If the next work tells more of a story than just Lizzy having her way with someone, that would be something promising. I’ll have to see if that comes or if that’s only Lizzy and whomever she finds herself with.

The story was interesting right up to the point when Lizzy’s transformation took her body into the realm of being “too much.” There’s a point where reality is stretched that little bit too far and this work passed well beyond it. The mental picture of the “new” Lizzy just doesn’t work for me.

I’ll see where the author takes the story from here, there’s an obvious place Lizzy will wind up at some point, and perhaps the other transformations will be a little more reasonable. That said, I’m also hoping the author manages to get back onto the path of story telling and be less concerned about describing events in the minutia they did here.