And Now the News… Part V By TeraS

A Review of The Unleashing by Jasmine Wright

A Review of Power Hope Futility Oblivion by Michael Stewart 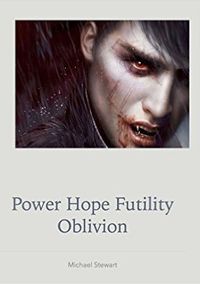 Story matters. I have said this many times in my reviews and being so there are some works where there is story, characters, and a sense of purpose. I’ve never really liked vampire novels, to be clear, but when one appears that has Lilith as a Succubus, then that is one I do have to read and see how she is portrayed.

And that’s the thing isn’t it? It is the characters, who they are, why they acts as they do, that drives story forwards. It isn’t enough to have something happen without explanation however and when it does that causes some problems.

Federico’s, one of the Ancient vampires, life is about to change radically. His entire world will soon be uprooted and devastated by a horrific war between two squabbling sisters. The fate of the entire world hangs in the balance and in his hands.

The past always comes calling, even if you are Lilith and are the beginning itself. The world can be yours, to do as you wish, but there are always those who must oppose your will for that is who they are. Even at the cost of the world itself.

This work is, overall, an interesting mix of the supernatural with some aspects of science fiction and adventure mixed in. For the most part told from the first-person, the work tells a complex story that sometimes loses its way here and there. In spite of this, the characters have clear voices and personalities and in that the author’s strength comes through.

Among all of the characters, Lilith appears in this work and she is described as a succubus, has some of the sexuality of one, but acts more like a general in control of her world dealing with plots and forces which continuously confront her. There’s really very little of Lilith being a succubus, and I found that a little disappointing. However, she has a wonderful personality, I love her occasional quips and how she relates to those around her.

Lilith is a Queen, but she’s more than that. She cares, in her own way, about those around her, the world as a whole, and tries her best as she can. That’s not a simple thing by any means, and seeing her decisions and actions does leave some questions and concerns, but then all such things do over time.

There’s no erotica to speak of, really there need not be because the story doesn’t call for it. But it is necessary to focus on the work and not be distracted because there are little threads running throughout and must be paid attention to.

There are some minor editing problems with this work, mostly some apostrophes missing here and here. But the real issue comes to the dialog which reads very unevenly. At some points there is style and presence in the words and in others the characters sound more like robots than individuals. As well some of the descriptions of event sound odd, mostly how things unfold and aren’t quite explained well. Details are missing, some important ones at times, and that left me trying to piece together what happened exactly and why.

But the single problem that took much of my enjoyment of this work away was the ending. After all of the time spent in telling the story, with all that transpires, the ending is sudden, isn’t explained, and leaves much to interpretation. A single sentence ends this work and it really shouldn’t have. A cliffhanger is fine, and there is one, but the final line of the work was a sentence too far.

Overall an interesting mix of the supernatural and science fiction which works quite well. Lilith was complex and I liked that she was. However the ending bothered me, I expected more considering how much effort went into the work overall and that took away quite a lot of my enjoyment.

There appears to be a possibility of a follow up to this work, though that isn’t clear by any means. If so then my opinion will change I think, but until then, the ending just didn’t work.