A YouTube of a Morrigan Aensland Game Sprite Skin

A Review of Forbidden Fruit by Alana Church

A Review of Sacred Lust: Maiden Training by C.P. Brickhouse 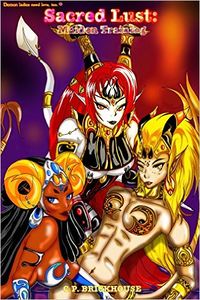 It’s important when telling a story that the characters remain true to who they are throughout. Losing who they are for the sake of some erotica doesn’t make for a well told story. Along with that comes the need to create a universe in the story which makes sense, allows for growth, and most of all, tells a story. If an author can manage to connect the dots in the right way, then what comes from that can be amazing.

The thing about being a Queen is that everyone’s problems come to you. Whether you like it, or not, you are the one in the end that makes the decision, sets a path, and deals with the consequences. However, it also means that you also have to be wise in both the ways of the mind, but also the heart and soul.

Lilith Belili, the sister of the Demon Lord Asmodeus, rules in his stead while he is away. However, circumstances in the Realm of Lust have become routine, and she is bored. When a vassal requests her presence to combat a threat involving civil unrest (and a would-be lover), Lilith, along with her handmaiden Dumuzi, see the chance for some long-awaited excitement…as well as numerous opportunities to use their formidable seductive skills.

Lilith has a problem. She’s bored and that’s never a good thing for someone that is known as the Demon Queen. Still, a call for help might help her mood, along with some fun and games with her favourite toy of course along the way. It can be hard to be the Queen, but then again, it’s fun to be the Queen too.

There isn’t a focus on erotica alone, nor is that forgotten along the way of telling the story. There is depth to each character, they have their own wants, thoughts and goals. Not one character is two-dimensional and that appealed to me in the most wonderful way.

Lilith is, as you would expect, the Queen Demon of the story and while she is a succubus in her world, she rules with seduction as her means of control. She isn’t evil as a whole by any means and being so that makes quite a lot of her actions turn towards thinking and finding answers rather than by brute force. Lilith is a force to be reckoned with, there’s no doubt, but it is in how she uses her abilities to control, tempt, and then bring what others desire to the fore.

It was a pleasant surprise to see Lilith be a seductress, one with a quick mind, a sharp wit, and the realization that it is better to seduce and have something given freely than to take it by force, or worse, cause pain. That is a rare thing to be seen in a story like this, and in doing so this work became much more than I expected it to be.

Dumuzi, a leser succubus, is Lilith’s favourite and how their relationship is told to me speaks of a love between the characters. Again, that’s something special and wonderful and it becomes core to the story over time.

There is a smart, well told adventure which mixes with Lilith using her powers of seduction to find answers and then making a plan to deal with them. Along the way there is quite a lot of erotica, but it makes sense, isn’t silly or makes the characters be other than they are. There is a point to the story, to the adventure, and as that is told the detail and care to tell that makes this work a wonderful read.

The one thing I would have liked would be more time spent “in” Lilith’s mind as things transpired. Often her thoughts are cloaked, hiding her plans from the reader and while that makes for some surprises along the way, that leaves something aside. Often Lilith thinks about Dumuzi and that relationship is assumed to be there most of the time. More story about that would have been nice.

Along with this, perhaps a little more of Lilith being a Queen as well. By that I mean she acts like a Queen, which I enjoyed, but she has so few moments where her being a seductress is allowed to play out. Most of the time when Lilith seduces there’s not much time before the other falls and I felt that limited showing who Lilith is. There is one passage where she proclaims her beliefs and what her realm is, which I enjoyed. But her realm isn’t seen as the story is off in another part of the universe. It would have been nice to see more of Lilith in her home and being the Queen.

Just a well told story with interesting characters that doesn’t lose itself in the midst of the erotica. I adored Lilith, her way of thinking and how she tells one simple truth. For succubi, the best pleasure is the one that is freely given and wanted most of all.