A Review of Futanari Succubus Queen by Katie Sin

Frills do not help a Succubus costume honestly 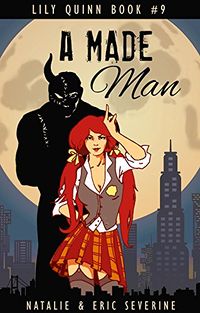 A Made Man by Natalie Severine and Eric Severine

There comes a point in every series when the main character’s world gets tossed upside down. A moment when things are revealed that have been building for quite some time. There is loss, there is pain, and sometimes there comes a moment when knowing the truth means losing something which means more than you know. The question then needing to be asked is… why?

In nine years of monster hunting, I’ve never faced anything like this. The College calls him a golem, and we’re not talking about one of Sabra’s cute little homunculi. Someone has sliced up a human and stitched him together with parts of a demon, and what they’ve created frightens even me.

Now I’ve been forbidden to pursue the golem. But why would anyone make a creature like him? And why am I being told to leave it alone? Something weird is going on here and I’m going to find out what.

But before I can ask any questions, I have to get close to the golem. And trust me when I say that he isn’t the cuddling type. I like a challenge, but this one may be too big for me to handle.

One thing that Lily has never had to face is her own mortality. Being who she is, that’s never really been something to worry about. But a close brush with death leads to a closer brush with something very evil that wants her. There is a price to be paid and Lily will forever be crushed by the one that pays for her.

One of the things that Lily really has never had to face is her own death. She has been hurt many times but she’s always managed to save herself. In this work, for the first time, Lily’s luck is severely tested and in being so that shows once more who Max is and what he would do for her. It’s an important point in the series, one drenched in sex and need, but as well there’s a clear moment in Lily where she knows the truth and has to face that, if she can.

Beyond trying to solve the mystery of this story, which takes Lily to answers she never expected, nor really wanted, the truth comes out and that’s shocking in many respects. Lily suffers a great loss in this work, she discovers the truth about her father and a little about herself. There’s a good deal of pain which touches so many lives before this story is done.

There’s been a shadow haunting this series and in this work they are finally revealed to be… well, overall just about exactly what I expected them to be. What’s disappointing in that comes from the character themselves. They aren’t interesting, they are little more than raw power with nothing more to hold them together. I have to admit that when the climax of this work came, I was hoping for something more from Lily than what did happen.

Lily’s personality id one of self-assurance. Of being a force to be reckoned with. She’s a smart ass, a sexy one at that. It feels a bit odd in how she deals with the outcome of this work, one that rips into Lily at her core. There’s something missing there, something important looking back on everything that’s happened to her. Lily is more than her body, but that seems to have been forgotten in this work for the sake of the erotica to a point.

There are some very hot scenes with Max, a touching encounter which went in directions I didn’t expect to be honest. The former scene is everything I would have wanted, the latter a mixture of truth and loss that’s a bit hard to take all things considered.

While some massive changes come in this work, much of the overall series mystery is still unresolved. There are a lot of hints, some of which I have been pondering from the first work in the series. Lily herself is still as much a mystery as she was, save for one thing. Her humanity comes out in this work and it shines for one simple point. Lily can, and does, love. That’s a telling power in what is to come.

This is very much a turning point in the series, but even so there’s a feeling that the next work in the series will not go where it needs to. The big questions about Lily have started to be answered, there are some awful things that have happened and they will tear at her. If the series doesn’t take one book to get through all of the “why” before getting to the “answer” I will be disappointed.

There are three more stories in the series and in that time a lot of plot threads, a lot of Lily’s past and her future need to be dealt with. Overall, that is her life, her love and her past. I hope there is a really good answer to everything that’s come before. The series deserves that and I think it will happen.

Assuming of course that Lily gets her head on straight before it’s too late.