A Review of Blood Immoral by Astrid Cooper

Not as much Hot Stuff as Questionable Stuff really…

A Review of In Search Of Her Demon by Jessica Stone 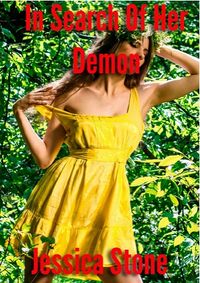 In Search Of Her Demon by Jessica Stone

It’s interesting to read a story in which there are two willful, dominate personalities confronting each other. That’s not to say they come to blows however. Pitting a woman of sexual needs against an incubus with his own demands and lusts leads to what could be something more than just the sex itself. Really that’s the interesting part. The teasing, the need that builds, and what happens to the characters when one, or both breaks, if they ever do.

To play with fire, one can be burned. Whether through being careless or being aloof of the danger, the danger is there. In the end, one can tame it, be consumed by it, or neither. Sometimes all three happen.

Galenia has never, ever been satisfied by a mortal man… not even once! They are weak, frail creatures not fit to lick her boots… let alone anything else.

She has heard, however, that there is a demon in the forest- a demon that lurks in women’s dreams, bringing them to unimaginable heights of pleasure. She sets off to find this demon and make it serve her… but will she end up succumbing to the demon’s powers and serving it instead?

Overall, the story tends to be mainly focused on the two characters teasing each other over and over again. Much of that is really well told, the innuendo, the toying, the taking of each character to the edge in who is dominating whom works really well. There’s a building up of tension, sexual and otherwise, that fits and I liked that very much.

There’s a good deal of time with Galenia describing the incubus, her thoughts about him and her reactions to his overt sexual approaches. The battle within herself, trying to keep teasing, because she can, I did like. If she wasn’t said to be mortal, she would be very much a succubus-like character as a whole.

The incubus, who is never named, but is described over and over again in great detail is not so much a character as a force of sexual nature. There are glimmers of something more, but that’s not really explored for the sake of the story getting to the point where he dominates Galenia. With all that is told in his home, what he does, and says, that’s a shame. Just giving his name would have helped, but then he never learns Galenia name either.

The erotica is very much male dominated, Galenia is used in various ways, mainly for his own needs, but there are some moments when she finally has some satisfaction. I’m not sure that’s enough reason for how the story concludes though. She’s very head strong, knows what she wants. I’m unsure if she ever really has that in the end.

The work needs at least one more editing pass, there are spelling mistakes and dialogue that just reads oddly. It would have been a much better story if the teasing would have continued, that both characters toyed with each other more. The sex isn’t as interesting as the teasing, which is saying something. It’s a shame that the author never continued this series, never expanded on the characters and never took the story further than they did.

Sex alone isn’t a story. The balance is there, and it tells a story that is interesting, if at times it’s difficult to like Galenia or the incubus all that much. There’s history in the characters, there’s a connection, if a tenuous and needful one. But there’s seemingly a lack of a future as things end and that’s a shame.

This was supposed to be the first in a series, but that series never came to be. I wish there was more here than just the sex, but really there isn’t. It’s a shame, there could have been more. There is story, and Galenia’s is a good one. But giving the incubus so much character and never given him a name leaves something missing.