A Review of In Search Of Her Demon by Jessica Stone

A Review of Blood Immoral by Astrid Cooper 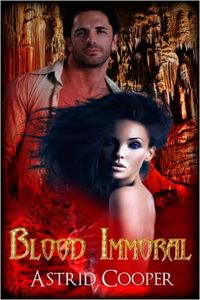 There comes a point in a story where something is revealed about a character which matters. Whether that is their beliefs, expectations, or simply the humanity inside of themselves that they aren’t supposed to have, it matters. Telling that story, explaining not just they why but the what comes next matters.

It’s very difficult to take that reason and build upon it within the pages of a story when there’s little time to do so. There is such as thing as having too much action, or too much going on, that burns sense away and leaves only reaction. Sometimes taking a breath tells more of a story than sucking wind… or something else.

In Adelaide, the city of churches, it’s the night of the hunter’s moon and the Blood-kin venture out to play. But things aren’t what they seem. Mirrazan is caught in a deadly confrontation with Ric, the cop, and a band of rogue vamps. Things can’t get any worse. Wrong! Ric is not the man he appears to be, and the Law of Blood Immoral has been broken. So what starts out as a pleasant night of carousing, turns to dark and dangerous and the game of seduction takes on a whole new meaning of deadly when succubus and cat-shifter lock hearts, souls and bodies in the duel of love… All hell breaks loose.

Mirrazan is not like the other succubi around her in one very important way. An encounter with a human turned vampire, a police officer who isn’t what he seems, turns to a path unexpected for all involved and those around them.

Mirrazan is interesting as a succubus in that she isn’t portrayed as being unfeeling or aloof. She has a soul, she regrets many things in her life and wants something more. That creates a character that one wants to see succeed in their quest to be more.

The thing about this work is that promise, the idea of where this story would go doesn’t really get developed very far. There’s more focus put on action than on development. There’s more time spent on the erotica than the characters really telling their stories. It reads very much like the opening chapters of a novel and being so there’s something missing.

There are hints about the world Mirrazan lives in, what happens in it. There are a number of minot characters introduced, a threat to them offered, but that isn’t paid off in the story. Really it can’t be for how short this work is. The time taken to put the two main characters together was good, and made sense, but once the action started, the need to run came into play, there wasn’t time for anything else.

Even when they stopped and paused, they really didn’t. The story moved immediately onto a short hot flash which added another layer of complexity to the story. That did make things more interesting, allowed for the story to branch off and become something more. Instead the author wrote a short conclusion and then ended the story right about the time when the next chapter should have started.

The author would have been better served to take more time to set up Mirrazan’s past, her world, more than she did. To allow for the threat to mean something more than being a shadow and nothing more directly than that. There is a secret that does come out eventually, but when it does that just serves to take Ric, who I did like, and make him unlikable in an instant. The twist wasn’t needed as for Mirrazan, her wishes seemed to be answered. They should have been, all things considered.

While i liked the beginning of the work, how it was written, and how things were presented, once the action started the writing turned away from telling the story into showing the story and that showing was like watching a movie and fast forwarding through it. Comprehension was lost to flash and that is never a good thing.

As the beginning of a novel, this would work really well, but as things are it just seems to be lacking focus, intent, and something more than a moment of sex between two characters that are a bit insufferable with themselves at times. Rushing through the scenes just leaves a lot in the dust.