A Review of Aaron Burr: Necromancer by Dou7g and Amanda Lash

A Review of Lovably Dead by Lex Allen 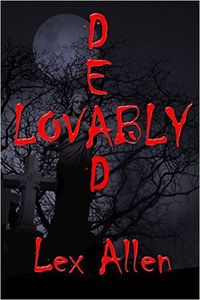 The thing about anthologies is that they are, as a whole, somewhat uneven at times. That’s especially true when there isn’t quite a theme in the collection so much as there are a series of ideas. It’s a bit of a shame when the ideas are quite good and offer a lot of promise for a novel, but the author never managed to make that happen.

It is possible to mix erotica and horror, if it is done in the right way. Finding that way is, of course, the hardest thing to do. Doing that well can be a wonderful surprise when such a work is discovered.

The anthology contains the following works as described by this author:

As usual with anthologies, I will comment on the succubus work and then the collection as a whole, giving a rating for the succubus story and the work overall.

Doctor Gavin has a problem, actually two of them. One is in his mind, the other is sitting in front of him. One he can’t get rid of, the other… well, she doesn’t want to leave without getting a little piece of him, or more.

What I liked the most about this short story is how there’s a real focus on Rory, the succubus of the work, being seductive. There’s no horror, no blood, nothing that takes away from her being a seductress, being a succubus and using her abilities to ensnare. There aren’t any horns or tail, mind you, but there’s a really well told succubus character that has one thing on her mind.

Beyond Rory, the other character in the work, who I shan’t name or reveal much of, is really a lot of fun, all things considered, and I would have liked to know a lot more about them than was revealed.

The thing about this story which makes me wonder is everything that isn’t told, vaguely hinted at. Who is Rory exactly? What is her past? There’s not a lot of time spent in the telling of that as the work quickly moves from introduction to seduction. That’s not a bad thing, it is done really well and I enjoyed the turns of phrase and Rory’s ensnaring tone and teasing. I just really would have liked to know more about her.

I could well see a novel written around Rory, about what happens to her. I’d love to see that, I think it would be an amazing read. But I will have to settle for this little taste and tease.

Four our of five pitchforks.

The balance of the works in the collection are all written quite well and tell some varied and interesting stories too. But like my thoughts about Rory’s story, there’s a real feeling when all is said and done that there’s more to be told.

I will admit that really only Rory’s story held me, the other themes were interesting, but not what I was looking for. But that doesn’t matter because the works themselves are captivating in their own ways, in their characters and more.

If there is one single thing to be taken from this collection, it is that the author needs to take these little pieces and build upon them. There’s a lot that could be done with these concepts, ideas and more.

For the work as a whole, I’ll give it three and a half out of five pitchforks.

Really all of the stories in this anthology could be made into novels should the author put their mind to doing so. I will admit to being biased, but Rory’s past, her story, would be something quite interesting to know, even if things end in the way they did here.