A Review of Lovably Dead by Lex Allen

A Review of Aaron Burr: Necromancer by Dou7g and Amanda Lash 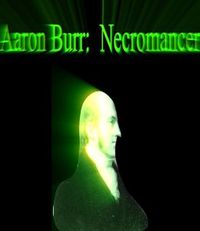 The thing about long series is that the characters have to develop. Change happens and in doing so, a lot of unexpected things comes to pass. That can be something as small as changing one’s attitude or something far more important like developing a shoe fetish. After all, there are such things as priorities, even if your life is on the line.

In the last book Amy the mage and Helen the apprentice succubus received a call from Lorelei the dark elf sorceress who was in a life and death struggle against a powerful necromancer, and getting the worst of it. Amy and Helen rush over to help…eventually. The necromancer reveals himself to be…Aaron Burr, the former vice president.

Some battles seem to go on forever. It feels like you keep banging your head against a wall and there’s nothing that happens. Calling a friend doesn’t seem to go anywhere. But there comes a point where the gang gets back together and things happen. Woe to the one that breaks a heel for that will bring about Hell on Earth.

One of the things that I have enjoyed the most in this series has been the intermixing of humour into the fights the characters get into. While there are some really serious moments along the way, that doesn’t take away from something the characters enjoy doing. They love taking little shots at each other, teasing, being on occasion a little bit silly. It’s a part of who they are and being there, adding to the characters themselves, is amazing.

As an aside, one of the most cute aspects of this comes from many of the female characters having a teeny bit of a shoe fetish. I can’t help but laughing when there’s talk of shoes and how there’s this moment of “hold on. shoes. more important.” that comes across no matter how bad things are. Priorities matter after all, and the women certainly have them well in hand.

This work in the series is a running fight scene in which a lot of things go wrong along the way. There’s tension, confusion, and a little bit of misdirection, all of which make what otherwise would have been a rather dry tale be so much more. The reveal about the “big bad” is deliciously apt, really it wasn’t what I expected, but it being who it is, makes a lot of sense and even the little tease of their past makes them a better opponent than they were in the prior work.

That’s the thing here most of all. The development of the characters, the little truths in the various relationships in the midst of battle were unexpected. It added so much and in doing so left some really important plots to be dealt with in a future book. Some of them, for some characters, will change them immensely.

I’m looking forward to where things go from here. The question of Kendra’s little teeny problem needs to be resolved and that’s just one of the many things going on. Every character has something, or someone, they need to comes to terms with. Shoes might not be the answer to everything, but if nothing else, they might keep some of the women from killing each other long enough to work out their differences.

Four and a half out of five.

I’ve missed the humour, the fun and the characters. To have a smile on every page is a wonderful thing and in this series, that’s always been there. The question is, what’s next and who is it going to happen to?

There are a few plot threads needing to be tied up, if not the characters themselves, and I dearly look forwards to seeing how that all works out.