A Review of Wicked City by Tracey H. Kitts

A Review of Long Term Memory by Nanea Knott 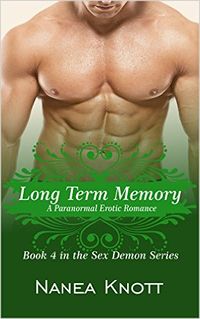 It’s been a little while since I’ve written a review of the Sex Demon series by Nanea Knott here on the Tale. I was thrilled to see that the fourth work in the series was recently released and so I return to a series that I love and adore.

The single thing about this series which I’ve enjoyed, is how deep the characters are. While there are a lot of characters, their lives merging, turning and twisting, each one has a story. That in itself is wonderful, but many times the more closely held characters are the ones with the most interesting stories to tell.

In these characters, their flaws are quite telling. They are not simply issues to be dealt with, brushed aside. There are consequences suffered, pain deeply held. The emotional context matters, but beyond that, the relationships which come out of that context drive the characters to act in ways which don’t always make a lot of sense.

Life happens. Things change in an instant and the blame and guilt can be overpowering. For many characters in this series, there is quite a lot of guilt to go around. It presses upon them, makes them not see what is there. Sometimes the hardest thing to overcome is one’s own stubbornness. Sometimes that isn’t a one way street. It’s a head on collision.

She’s grateful for the present. He’s stuck in the past. A deadly organization will jeopardize their future.

Humans First has declared war on sex demons and Evan Maximus is an incubus ready to fight. His past has left him bitter, but he’s trying to put it behind him. One phone call changes everything.

Gwen Taylor is building the life she wanted before the accident that left her in a coma for two years. She follows an old friend to a new city hoping to meet him again.

When they meet again, Evan pushes Gwen away. He can’t let her get hurt again. She deserves to be safe and to be with a better man than him. Gwen pushes back determined to show she’s strong enough to stand beside him. Her defiance puts Evan in the cross hairs of a sniper.

While Evan fights for his life, Gwen has to decide, is she strong enough to save the love of her life?

Evan is the strong and silent type. While for an incubus that’s not such a bad thing, sometimes it means there is a reason for why they are. For Evan that reason is Gwen. A moment leads to pain and Evan cannot manage to forgive himself. But the universe sometimes gives you what you are least expecting. The problem comes in Evan accepting what Gwen offers over his own sense of doing what’s right.

One of the characters in this series that has always bothered me to a point has been Evan. Throughout the series he’s been, for lack of a better description, kind of a brick wall. By that I mean there’s never really been any emotion, no connection. He’s always been “all business” and beyond that there’s never seemed to be any other real relationships for him.

This work focuses on Evan and as the story progresses, the reasons for his emotional disconnect become very clear. Evan’s story, the reason why he has become the person he is, is a telling one, but beyond that, the singular aspect of his personality that I found telling was his sense of honour. It’s rather two sided, overall, as a whole however. There’s no question that he wants to do right for the right reasons. The issue comes in that his bullheadedness gets him into situations where, if he would think before opening his mouth, his life would be a lot simpler.

Evan’s past catches up with him when Gwen appears. Gwen’s story is tragic, without doubt, but there is so much strength and poise within her. As her past is told, who is connected to her life, and how things have transpired to bring here to where Evan is, there’s sort of a mirror that appears between Gwen and Evan. There’s little question that they care about each other, the problem is that neither of them seems to be able to get through to the other and make things right.

It’s a bit of Evan’s character flaw and Gwen’s single-mindedness that gets them both in trouble. There are points where you want to take the two of them and smack them both. By that I mean there are situations where if they would just talk and listen to each other, there would have been less drama. But then there wouldn’t be some of the more touching and beautiful scenes that appear. The awkwardness that comes out in Evan is adorable really, and I found myself wondering what things would have been like for them both if events hadn’t turned as they did.

Sometimes the story behind the characters is more than what is told. I felt there was a lot unsaid about both of them, that there is something more, something important to be said further. Not in a poor way, but perhaps something special to be revealed or encountered. Either way, taking Evan from a stone to who he really is made a huge difference and in doing so made me like him far more than I did before.

While the story focuses on Gwen and Evan, the mysterious group against succubi and incubi appears, and is fleshed out a bit more. There’s a certain level to them that is a bit distasteful, but then they aren’t supposed to be liked very much. The on-going theme through this group, the characters that appear representing them, seem odd, almost strange at times. Beyond that, events that unfold as a result of something Gwen is asked to do, leave me with the same question I have been asking myself throughout the series. That question comes to: ‘How?’

There’s a certain need to suspend belief at times with this group, mostly from some of their actions which I still can’t quite wrap my thoughts about. There’a also a revelation through them about a major character in the series that is quite shocking and surprising. How that particular event, it’s implications, and what it all means, comes to pass as the series unfolds leaves me with a myriad of questions to ponder and to try to fit the puzzle together.

There’s also a bit more told about the Regents, the succubi and incubi in this universe as well. While it’s been clear that some good is done, in this work there is some real concrete meaning behind the platitudes seen in prior works. Sometimes there is good to be found in the harshest of places. It give some hope that there is more to be found within them.

Marissa, really the core character of the series, comes out a bit more in this work, and I’m still of two minds about her. I can understand her needs, why she approaches things as she does, but sometimes her actions just rub me the wrong way. Overall she did the right thing for the right reasons in this work, but nonetheless, some of her words, some of her statements, made me shake my head. Sometimes a kiss is better than a hammer blow to the head. Marissa’s emotional state leaves me wanting at times. Being a leader doesn’t always mean one has to be emotionless. I really want to know the reasons behind who Marissa is and why.

Many of the events, threads and characters in the prior works make appearances, which neatly sets this story into the larger series well. There are still many threads not continued, nor really should there be, considering this is Gwen and Evan’s story first and foremost. But there are hints which seem to suggest what is coming and in that I think the series will be moving towards something unique.

The series continues to grow on its strength, the characters and plots. The erotica isn’t silly or odd, it carries an emotional attachment. The need to find oneself, to find the answer to the question they each have makes the story captivating and held me throughout. Strongly written with purpose, but also with the author’s joy in telling the story of her characters, their lives, loves, needs and losses. Story matters, I’ve said this many times. The author continues to write an exceptional series, one that I adore and look forward to seeing continue soon.

I look forward to see what comes next, where the mysteries turn and what comes to pass. Not everyone and everything will be the same, not everything will turn out for the best. But finding the answers will lead to one thing. The truth, whatever that well may be.